An uneventful and aggressively air conditioned bus journey took us from Havana to the small town of Viñales. It only took four hours (including the obligatory stop at a roadside café/ gift shop designed to encourage sweaty tourists to pay over the odds for bottled water and access to el baño), but the small, colourful town (it’s almost a village, really) is a world away from bustling Havana. We were collected at the bus stop by the son of our host, and wandered through the dusty streets (there are three horizontal streets and about six vertical ones), watched by the entire popular of Viñales, as it appears to be a local passtime to sit in rocking chairs on the roomy front porches, watching the world go by. 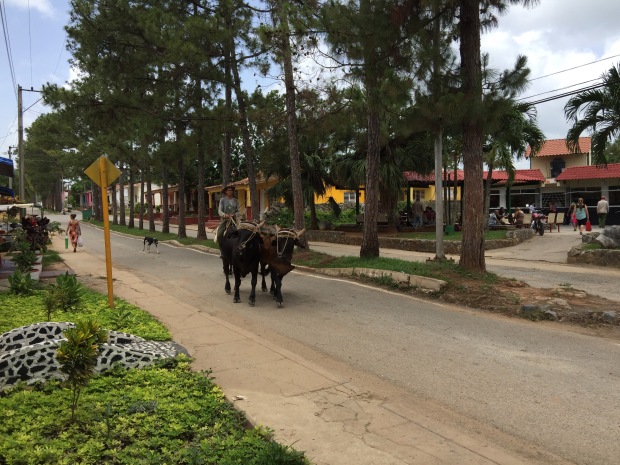 Our hosts were welcoming and obviously delighted to be able to chat to Kati in Spanish. Rosy showed us a huge map of the province and explained all the different excursions we could take to the surrounding valleys and plantations. Otoniel, her husband, brought us fresh juice, chatted about the football, and offered us salsa lessons – “after one mojito: Mm okay, after two mojitos (he wiggles his hips): little salsa, after three mojitos… (He strikes a flamenco pose): Professional SALSA”.

I found that even though they speak barely any English, I could easily follow their conversation with Kati via their gestures, and I recognise enough words of Spanish to be able to get the gist. They are truly lovely hosts and in a town where almost every house is a ‘Casa’, with a spare room open to any travellers who would like to stay (for a price, of course), we were very happy to have found Rosy and Otoniel’s little yellow house. (Also they have air con, which is unbelievably luxurious after a day of traipsing round the dusty sweatbox of the Valley!) 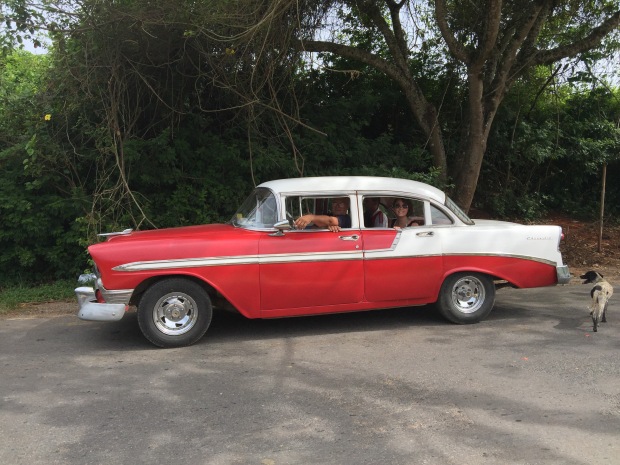 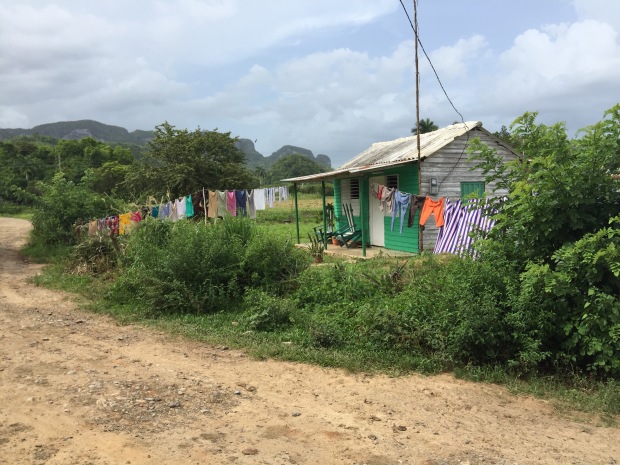 That afternoon, we followed a recommendation from our guide book (I swear by Lonely Planet, they always pick out the best stuff and they’ll tell you if something is going to be over run with tourists or whether it’s a hidden gem) and took a ‘sunset tour’ of nearby ‘Valle de Silencio’. It was honestly one of the most delightful afternoons I’ve ever had. I know I’m prone to declaring myself ‘in love’ with every place I visit and ‘delighted’ by every beach, kitten and pile of garbage, but you’ll have to take my word that this really was something special. Our guide (“Rylo, but maybe for you is easier just ‘Ry'”) a young, friendly and knowledgable local journalist with a flair for the dramatic and, we later discovered, a penchant for Japanese karaoke, accompanied us as we were driven in a gorgeous old Chevy out of the town and into the surrounding countryside. Although, as we soon discovered, ‘countryside’ isn’t really the word. It was part farmland, part tropical jungle, all banana trees and boney cows and dirt tracks, set in front of an incredible backdrop of lush mountains and blue sky. Ry explained the processes of tobacco farming as we explored, and knew the names and uses of each plant and tree that we passed (“this leaf is good for toilet paper. My friends say ‘why do you stay in Viñales? There is nothing to do here and your toilet paper is grass!’ But I like this town and, feel – this leaf is very soft.”)

We were taken to a small farmhouse and shown how the local farmers use completely natural methods and manual tools to harvest coffee (as Viñales is an UNESCO heritage site), ninety percent of which is then bought by the government at a fixed price. Later we were shown the same process with tobacco, which is dried in huge barns into big crinkly leaves and then rolled into cigars before being dried between palm leaves for several more months. We were able to taste cigars (I really really don’t understand cigars or why people enjoy smoking them but I think its an acquired taste or something), and came together with the other small tour groups and their guides to watch the sunset. The guides were so much fun, and we spent the sunset hour chasing after the many dogs which were roaming the farm, trying to persuade Ry to demonstrate his karaoke skills, and chatting (in French, Spanish and English) to one of the other guides who is a tax lawyer but works as a guide in his spare time. Everyone was super chilled and friendly, and we got the real sense that the population of Viñales love their town and are proud to live here, as well as having a strong sense of the national pride which we have seen everywhere, in the murals and statues and graffiti depicting Che Guevara or Fidel Castro, and the omnipresent declaration ‘Viva Cuba Libre’. 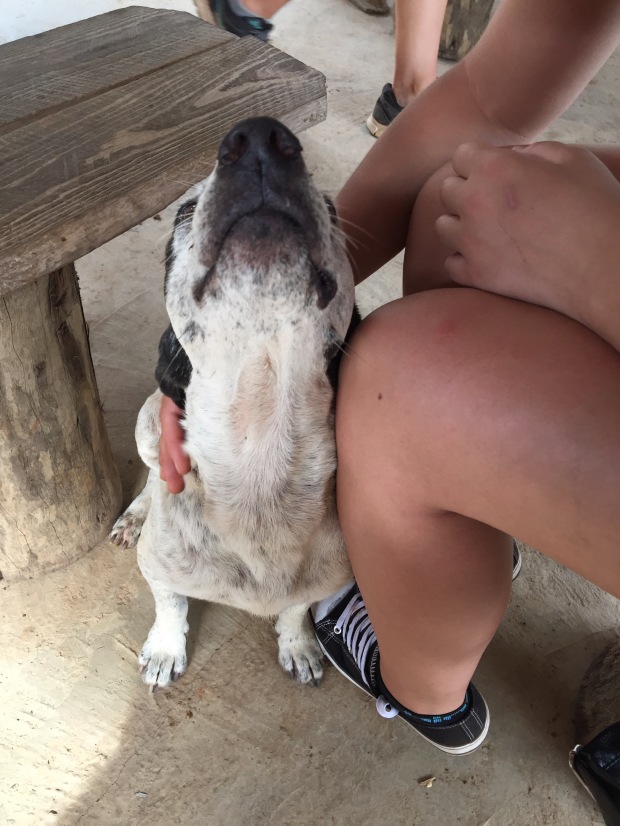 The next day Kati and I finally rolled out of bed (we were just exhausted and I’d been unwell in the night with some kind of food poisoning/ tropical disease from kissing all the dogs too much) about five minutes before our guide for the day arrived at our Casa. We set off towards the fields and mountains as Kati attempted to explain that neither of us had had any breakfast. Our guide Miguel was a little bemused at how totally unprepared we appeared, but very kindly offered to try and find us some fruit from a farm that we would pass, and he and Kati chattered away quite happily in Spanish (Miguel speaks what he calls ‘Spanglish’, so it was easier to chat in Spanish). Even though it was only 8am it was already so hot and humid that the going was pretty rough for the first half hour, tramping through fields, across dirt tracks and over ‘Cuban Bridges’ (a collection of junk ingeniously laid across a river to create a bridge – most useful if you’re a tightrope walker or have an exceptionally low centre of gravity).

Unable to find any food along the way we eventually stopped at a small wooden building which was serving food and fresh coffee with a great view and a slight breeze. By this team I looked and felt like death, and Miguel and the café owner very kindly found me some plain food to eat, and our host even mixed up a special local cure – a hot syrupy drink with fresh lime. As we left, he brought me over two small bananas wrapped in a napkin so that I would have something to eat if I felt up to it later on. After that I really did feel much better and found that I could understand almost all of what Kati and Miguel were chatting about. He told us that he is a basketball coach for a local school, and that the population of Viñales has tripled since he was young. Since the nineties, when more tourists than ever before were allowed into Cuba, the tourist industry has become an integral part of the town, and rather than being separated from the tourists staying in one of three government run hotels, the population can now set up their own casas, lead tours and run restaurants to take advantage of the many people from all over the world who visit every day. 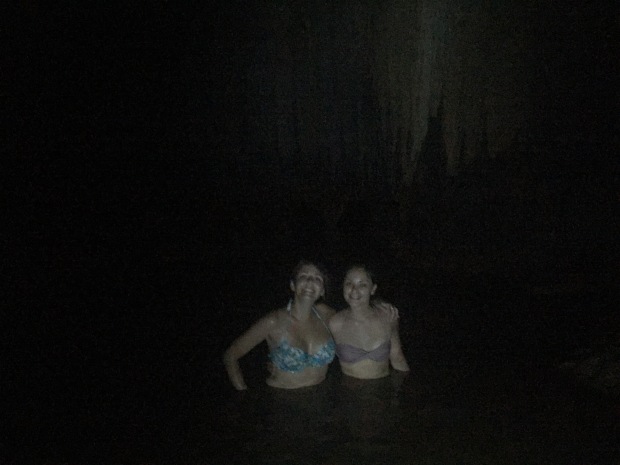 I’m starting to be able to piece together sentences and Miguel taught me ‘me no gustan los cabellos’ (I do not like horses), ‘me no gustan los vacas’ (I do not like cows) and ‘solamente me gustan los peros’ (I only like dogs). The valley is so beautiful, it almost feels like an old Western movie, set in a lush tropical landscape. The farmers all wear spurs, jeans and wide brimmed hats and are forever swinging themselves on and off of horses.

We must have walked for about two hours, chatting and asking questions and Miguel would frequently make jokes (like telling Kati that the yukka plants were actually marijuana leaves), winking at me secretly before revealing ‘no, not really, it’s only a joke!’ and chuckling to himself. (The three drugs of Cuba, he told us, are tobacco, rum and coffee).

Our destination was a cave in which we were told there was a natural pool which we could swim in. I wasn’t prepared for just how deep into the mountain we had to go (a six or seven minute walk over the uneven floor of a dark cave), but it was interesting and once we arrived there were a few other groups with flashlights. Miguel found us a little ‘island’ of rock on the edge of the pool and told us to jump in from the side so that we wouldn’t hurt our legs in the shallows. Neither of us managed to jump and we both half slid half fell into the freezing cold pool. It was very disconcerting swimming in the dark, and I couldn’t stop thinking about all kinds of prehistoric fish that might be lurking. After much screaming about how cold it was, we were able to swim around a little and make our way further down the cave, swimming under the stalagtites and occasionally, when the flashlights were turned in another direction, finding ourselves completely in the dark. I know I’m not making it sound very fun but it honestly was a completely unique and amazing experience. After a while Miguel summoned us back to dry land, where he looked on in bemusement as it became apparent that we had forgotten to bring towels and we attempted to dry ourselves, clean the mud off of everything and get our shoes and socks back on, all in semi darkness while balancing on slippery uneven rocks. Back in the light, he smoked a cigar with some other guides while Kati and I explored the outside of the cave, from where we had a fantastic view of Miguel’s really quite accurate reenactment of our inelegant fall into the pool and the subsequent screams and splashes.

We walked along quite companiably all the way back to town, and as it was now getting to the hottest part of the already almost unbearably hot day, we taught Miguel the phrase ‘only mad dogs and Englishmen go out in the midday sun’. A quick rest stop at the café, where everyone asked about my health and we were serenaded with lively traditional music, and we arrived back at our Casa absolutely drenched in sweat and completely exhausted. Miguel reckoned we had covered at least 14km – it was certainly a long way and we had to have a long siesta before either of us could summon the energy to do anything.

We had a quiet evening running errands and making arrangements, as we leave for Cienfuegos tomorrow (or today, by the time I can hopefully get some wifi). Everyone here has been so genuinely lovely, it’s such a beautiful area and our hosts at the Casa have been delightful. Viñales has been very good to us and I’m so excited for the next place!