We arrived in Kampot late in the afternoon and it was almost dark by the time we were settled in our hostel and on our way into town. We’d been told by numerous people we’d met along the way that we had to try the ribs at the Rusty Keyhole in Kampot, so we dutifully went along and ate the biggest plate of ribs I’ve ever seen – and it was really, really good. 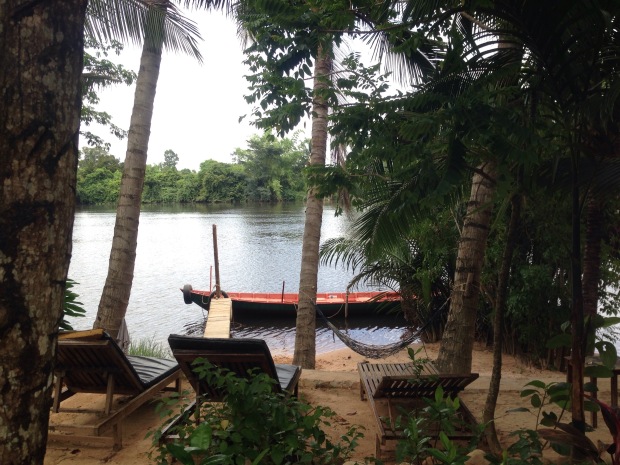 It was a bit of a strange introduction to the town, which we’ve since found to be so full of character and always buzzing with activity. There aren’t many tourists (especially not at this time of year), so the locals go about their business and pay no attention to us, except for the odd shy smile or to laugh at us as we go by (we are a constant source of amusement to the people in Kampot and I have no idea what we’re doing that’s so hilariously funny- we used an ATM on the high street today and a group of nearby police officers laughed so hard they were almost in tears… It’s quite disconcerting). A wide, slow river flows through the town and in the evenings we see fleets of little fishing boats returning, their passengers wave and sometimes pose for our cameras with big grins, making ‘peace’ signs with their hands, but mostly we just sit and watch the boats go slowly by, enjoying the peaceful and somehow content atmosphere of Kampot City. 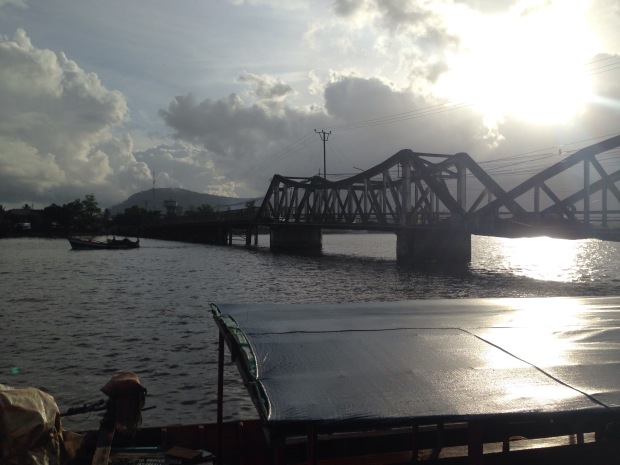 One of our favourite places to visit has been the night market, which is a collection of stalls, mostly selling clothes, arranged in a triangle and lit by gaudy neon lights. In the centre of the triangle, food stalls sell everything from rice dishes to bubble tea to meat balls, and in amongst the food stalls, a carousel, a dodgems arena and a swinging pirate ship ride (except this one is inexplicably shaped like a giant two headed chicken) flash and whirl and play 90s pop anthems and techno music over the noise of the traffic, and the sound of frying food, and the laughter and conversation of the locals who frequent the market. 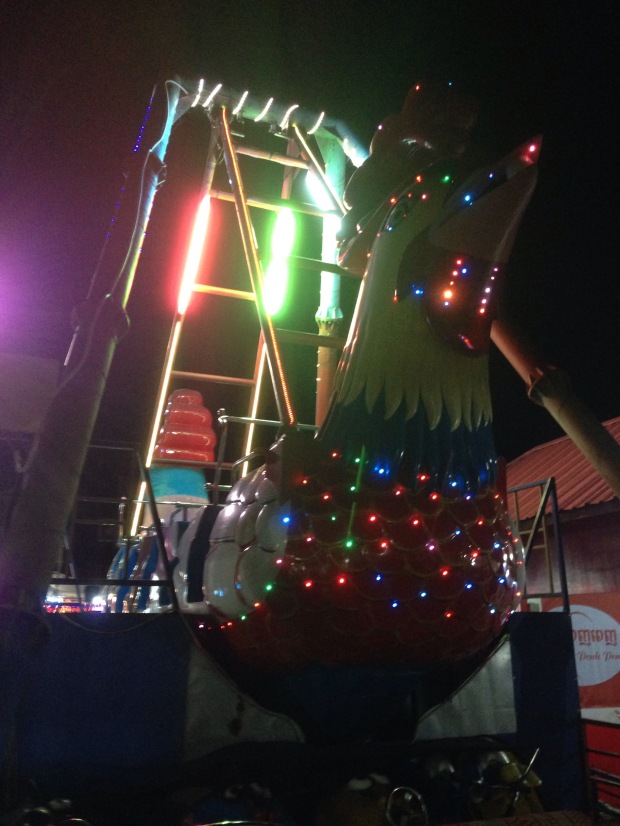 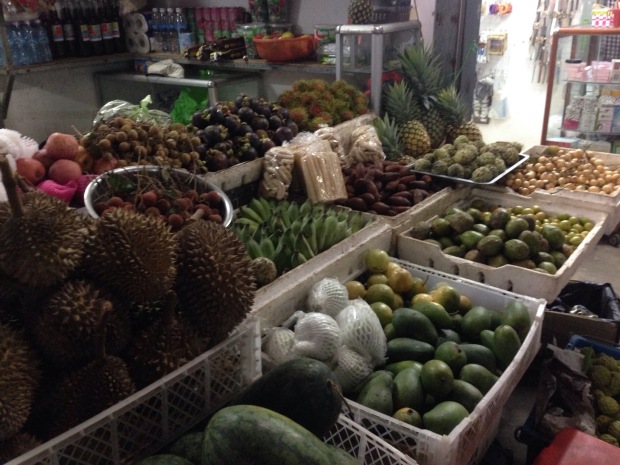 We came here on our first night and loved exploring all the clothes stalls – they were selling a really cool mix of western and Japanese fashion and I definitely would have bought and worn lots of the things. Then we saw the fairground and ran over to ask if we could ride the giant chicken. The ride operator (although he could have been a random Cambodian teenager for all I know) looked slightly bemused, but took our money and strapped us onto the ride, opposite two Cambodian girls who immediately started giggling behind their hands. It was so fun and strange and a bit surreal (who knew I’d end up riding a giant chicken in a market somewhere in Cambodia), and by the time we’d been riding for three or four minutes, Kati and I began to wonder when it would stop. Not that I don’t enjoy fairground rides, but two minutes of swinging back and forth and waving your hands in the air is normally enough. Almost ten minutes later, when we were starting to think we’d have to ride the chicken for the rest of our natural lives, a few more customers came along, the ride eventually stopped, and Kati and I bolted out of our seats and onto solid ground before it could start up again!

The next day we rented a motorbike (I think it was technically a moped) and after a few practice runs up and down the street we both piled on and drove to nearby Bokor National Park. It’s a relatively easy road and Kati was perched on the back to warn me of any incoming traffic and to help me figure out the roundabouts, but it was still a pretty steep learning curve. I can’t even drive a car in the UK and Cambodians seem to think nothing of driving on the wrong side of the road for several miles if it’s more convenient for them to do so (every time this happens I freak out in case I’m on the wrong side of the road) but in general everybody drives along quite happily and the protocol at junctions or turnings seems to be ‘just go, as fast as you can, and everybody else will try not to hit you’. Honestly, despite how crazy the roads were I was having so much fun rattling along through the countryside on the big dusty highway, I ended up missing the turning to the National Park and then, encouraged by my success with the roundabouts, attempted to execute an ambitious three point turn in front of a group of amused roadside stall holders. The bike didn’t have a reverse gear (or at least not one that I could find), but incredibly the first two points of the turn went quite well, only for the third point to propel Kati and I into the lap of a terrified man. I was absolutely mortified and drove away as quickly as possible, Kati shouting profuse apologies from her perch on the back of the bike as we sped off. Desperate not to assault any more innocents, I was pleased that the roads of the National Park were wide and smooth and mostly empty, snaking up and down through the forests and giving me plenty of time to have fun on the bike and practise my hairpin turns (helped by Kati’s screams of ‘brake!’ at appropriate moments). 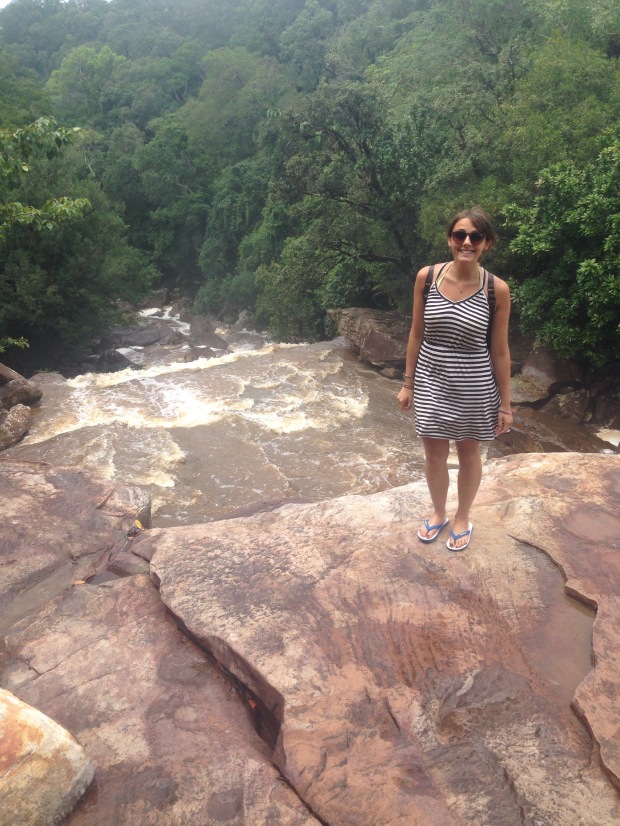 The park itself is a huge mountainous space which is being developed into a luxury resort, with attractions such as ‘100 rice fields’, ‘Japanese Farm’, ‘Chinese Lake’, lots of temples (which seem to have been built very recently to please tourists) and the ambitious ‘500 Rice Fields’. They’ve actually banned trekking to make way for developments (to the incredulity of our guide book), and it’s now a surreal mix of dense jungle and wide Tarmac roads leading to weirdly deserted ‘attractions’. We made our way to the ‘Chinese Lake’ and found a stunningly beautiful natural lake bordered by pine trees, and a plastic pontoon full of gaudy pedalos in the shape of huge swans. We climbed over the bridge and through the creaky fibreglass birds and the whole thing was pretty creepy – a ghost town on a ridiculous scale.

A little further on we found a huge waterfall and some overhanging rocks where we could shelter from the rain. I love waterfalls and have a morbid fascination with trying to wade right to the very edge, or climb up as high as possible, (which is weird because I A: can’t swim and B: almost drowned in a waterfall a couple of years ago), but I think they’re just so cool. Apparently, several bus loads of Chinese tourists share my feelings, but this particular group, which pulled up just as we were leaving, got the added fun of watching me try to turn my bike around and sneak through the line of buses without causing anything serious damage. That bike was not a delicate mover, but the tourists got such a good laugh out of my attempts to wrestle it, it was almost worth the trouble. 😉 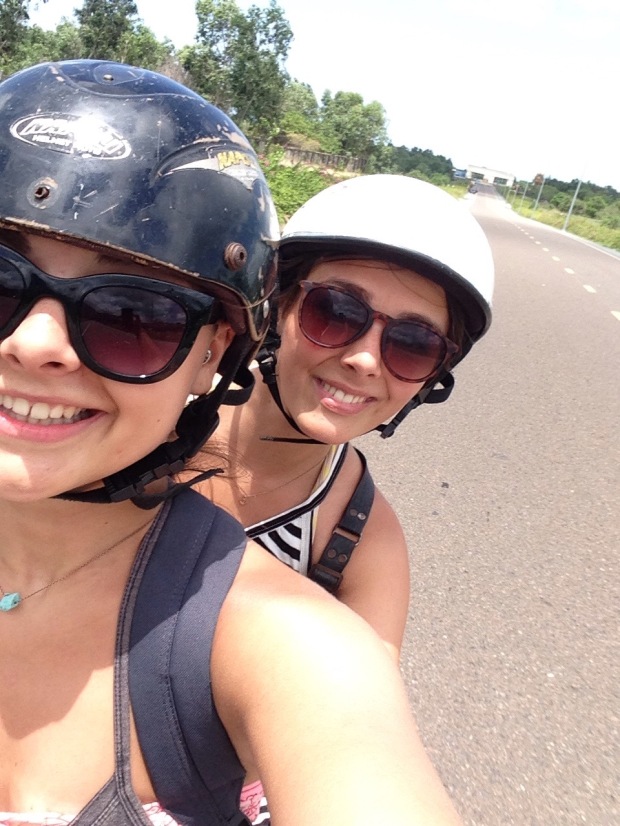 We wanted to explore an abandoned casino that some travellers had recommended to us when we were in Battambang, but it was all the way over the other side of the park, and before we were even halfway there thick fog descended and it started raining so heavily the raindrops felt like needles or sharp rocks hitting our skin. I could barely see anything, squinting to protect my eyes from the rain, and we decide to turn back and head for lower, and hopefully drier, ground. We pulled into the shelter of one of the road checkpoints and hastily pulled on extra tops and scarves. By the time we set off again, all of the officers had left the checkpoint building and were standing outside in the pouring rain, staring at us with polite curiosity.

Luckily we’d moved to a much more central hostel that morning so we had a lovely room that was easy to drive back to and get dry. We had been staying at a party hostel right on the river- normally I love party hostels (they generally have a friendly atmosphere even if you’re saving your energy for day time activities) but on the one night we stayed the dorms were messy and dirty and a drunk guy wandered in at 3am (to our wood cabin with a grass roof) and brandished a zippo lighter inches from my mosquito net. I was not about to get third degree burns from melted polyester so we decided to leave the next morning and found an awesome hostel with a private room, towels, real beds, a fan and hot water – pure luxury. That night we had our first hot shower in two weeks and it was absolute bliss.

(Ps – I’m sorry if the photos in this post don’t show up properly, I am jumping on a bus in two minutes and still struggling with the formatting!!)