Kati and I went ziplining through the forest above Angkor Wat. It was pretty incredible! We were really high up (above the canopy in most places) and the zip lines (ten in total) were crazy fast. It was so much fun!

We booked the ‘go ape’ style course on a bit of an impulse with a company called Flight of the Gibbons (as recommended by our lonely planet guidebook), but we absolutely loved it. The course was led by two enthusiastic Cambodian guides and we were accompanied by six excitable American girls on the three hour route around the forest. Kati and I led the fashion parade in our stylish matching elephant trousers (not really) and kept our cool on the rope bridges (not really – Kati has been known to slyly shake a rope bridge I’m walking on, but swears the guides put her up to it). We all wore full body harnesses with little hooks on the front and back and our guides would clip us to the zip line by the front hook and then lift us up by the back hook and then sort of throw us into the forest and we’d go flying along the line and barrelling into the tree at the other end. Such fun. Kati perfected a graceful sort of sitting posture and I preferred the cannon ball- bringing my knees up to my chin to reduce wind resistance and ensure maximum speed. Sadly we didn’t see any Gibbons (it turns out that the conservation efforts since 2011 have so far only produced two gibbons – a tenuous premise around which to name your company if you ask me), but it was such a fun way to see the forest and a genuine once in a lifetime experience. Also, there was a tree house at the top of the course for refreshments and we got a free lunch. A good day all around.

That evening, we returned to Angkor to explore Ta Prohm, ‘the lost temple’. This time, we were the only people there and the late afternoon sunlight was just perfect. It really looks like it has been reclaimed by the jungle- it’s like a scene from an Indiana Jones movie (and it actually is a scene from Tomb Raider!) 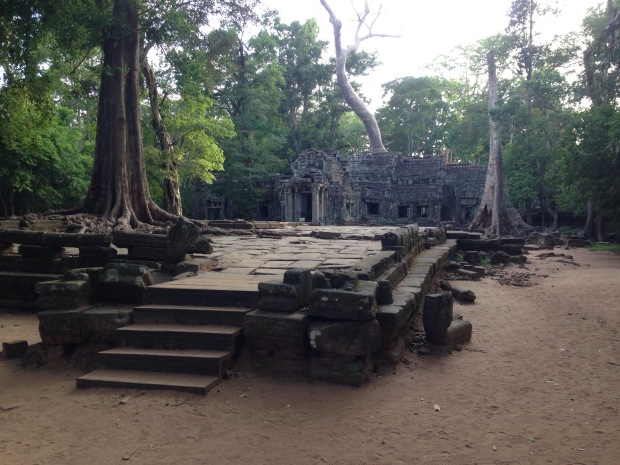 We watched the sunset from the top of a nearby temple, and even though there were quite a few other people eagerly looking west to catch the pink and orange streaks of night fall, it was really calm and peaceful, our legs dangling over the edge of the age old rocks, surrounded by the carvings and statues of this beautiful place.