(I got to see two amazing films this week, The Fault in Our Stars, and Begin Again, and I thought I’d share my thoughts – go watch them if you can, they’re both definitely worth seeing. ) Begin Again

This film starts with a bit too much of Mark Ruffalo’s nearly-naked body. He’s very hairy, but totally rugged and a little bit cute, so I suppose that’s okay. Mark, who plays Dan, an ageing record producer with a drink problem, soon becomes an ageing ex-record producer with a drink problem, no job, and a moody teenage daughter who lives with his estranged wife, Miriam, and enjoys playing the bass guitar loudly and tunelessly while radiating teenage angst. Meanwhile, Greta, played by Keira Knightley, arrives hopefully in New York with her boyfriend and song-writing partner Dave (Adam Levine), only to find herself broken hearted three weeks later as Dave gets signed to a record label, and leaves to go on tour, growing an awful beard and leaving poor Keira to move into the delightfully chaotic little flat owned by her friend and aspiring music producer, Steve* (James Corden). Greta and Dan meet at rock bottom, and as Dan convinces Greta to let him produce an album for her, after stumbling across her at an open-mic night in the east village (and slurrily assuring her that he is a record producer, and not a homeless man – why women in films agree to these kinds of things is quite beyond me), their business partnership turns into a really adorable friendship, which was probably my favourite aspect of the whole film. The chemistry is perfect, and the pair seem to have a real affinity, and affection for, each other, bonding over a mutual love of music, and a shared passion for the purity of recording, without the over-production and over-management of a record label.

With this in mind (and having just been fired from his job at a record label), Dan suggests an ‘outdoor album’, and using a makeshift setup in the back of his car (courtesy of Steve – played hilariously by James Corden), he and Greta, along with their band, (an adorable motley crew comprised mainly of  bored musicians poached from music schools, where they are sick of playing ‘f**cking Vivaldi’) travel across New York City, creating an album which is filled with the sounds of life and summer. I have to say I absolutely loved this film, it is funny, it has great character, and, although I am a great lover of Hugh Grant films myself (just don’t tell anyone!), I found that Begin Again had a lot more to say for itself than some of the more cliché productions of its genre. Most of all, I think this is because it is not a ‘romcom’, and although it explores Greta’s complex relationship with her boyfriend, and Dan’s complex love for his wife, it is primarily about the friendship between Dan and Greta, and Dan’s attempts to rebuild his relationship with his daughter Violet. It is not a love story, it is a story about love, and that is so refreshing, and pretty heartwarming to boot. Although James Corden is fantastic, and it is impossible not to like him (as always), I worry that he is cast here as the ‘jolly friend’, and I would have liked to see his character developed beyond this categorisation. There are a few cringey moments, such as the incredible bass solo which Dan’s angsty daughter suddenly produces, which creates a neat cinematic bonding moment with her Dad but is a little unbelievable, especially as Miriam stated pretty explicitly in the previous scene: ‘she’s terrible at guitar, Dan. She really is terrible.’  However, these are all things which only occurred to me upon reflection, and they didn’t impact at all upon how delightful and uplifting this film is. The music is fantastic, the setting is beautiful, and Dan’s scenes, especially one mid-recording where he bargains with a group of kids to try and get them to keep the noise down, and ends up giving them each ‘five dollars, two puffs of a cigarette and a box of matches’ – genius. This film will make you happy, and if that’s not a reason to go and see it, I don’t know what is. 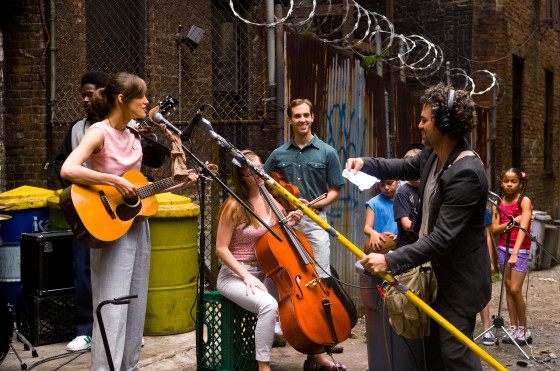 Big Love, PV x *Nobody in this film has a particularly interesting name. Dan, Steve and I’ve already forgotten the other one. They should have been called Rocket, Zodor and Tyrion. #justasuggestion …

Above: Violet angstily eats ice-cream with Greta (in a scene which is actually really sweet and funny. Hailee Steinfield plays Violet so perfectly.)