Two rehearsal days to go before the show! I’m nervous and I’m not even in it.
Luckily, the cast are handling things rather better than I am, as I discovered when I snuck into Scott’s rehearsal (I mean, I am actually allowed to be there, but) and chatted to them about their characters, accents, and life on Inishmore. (Also Scott’s plans to kill them all off, and Becky’s plans for retirement…)

Hi Jodie! Can you tell us a bit about your character Mrs Giles?

J: She sums up Inishmore in one character. She’s a gossiper and a bit of a hypocrite and her life is quite boring so she fills it with gossip, (lies really!) and she likes to exaggerate everything that’s happened and make it into her own little story. She gets a kick out of stirring stuff up. But I think she’s kind at heart, she’s just an old lady who’s lived in the same place her whole life and knows nothing else. She’s good friends with Mammy.

I do have a soft spot for her! How have you found the last three weeks?

J: It’s the first play I’ve done at Queen Mary and it’s been really fun, I love the Irish accent! It’s been fun to meet new people and just act really! Scott is a really good director, he’s really nice and he’ll tell you in a kind way if there’s anything to work on, I always agree with him. He takes a step back and lets us play with the role, but does give us constraints so we know what we’re doing.

Aw! I’m glad you’ve been enjoying it!
Wizzy, could you tell us a little about Aunt Gloria?

W: She’s a bit of a recluse, she left her parent’s house and the rest of the family as quickly as she could. She kind of still wants a connection with the family but she’s fed up with gossip and the way the family runs, especially her brother Johnny. I think she thinks that Johnny is turning into their father, who was very violent.

What was the best thing about rehearsals?

Haha! Talking of which, how was the accent?

W: It’s quite difficult with the lines. I love watching Father Ted though, so that’s how I try and get into the accent!

And what about your costume? Aunt Gloria has a bit of a wacky sense of style!

W: I find it quite funny, quite inviting, it’s very comfortable! It’s a change from the usual. I’ve really enjoyed the process, it’s been quite a quick rehearsal process but it’s been really good.

Becky, how would you describe the lovely Mammy?

B: She’s a cracking gal! She’s a lovely old lady, she loves her family and she’s the rock of the family, but she’s a bit of a gossiping minx. She is sort of the one that everyone confides in because I think she’s the only neutral character who keeps everyone grounded. She’s got this sort of horrible past with her husband, and her family breaking down, but she’s a strong woman.

Mammy spends the entire play chilling in her bed, (she literally never leaves the stage, or even puts her feet on the stage!) what’s that like?

B: I quite enjoy it, there’s not the stress of worrying where I’m supposed to be! And I can use that to put more into my gestures and delivering my lines.

Mammy is fantastic! She’s so sassy she has some great lines!

B: Yeah, I think I’d like to be Mammy when I’m old, she is my inspiration for retirement! 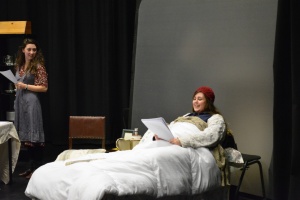 Hello Tom and Luke, tell us about Tommy and Simon

L: [Simon] He’s cool! Gay! an introverted homosexual, quite pivotal to the plot but he doesn’t say that much.

T: [Tommy] A tortured soul, with the weight of the world on his shoulders

L: or the weight of Inishmore anyway!

How was rehearsing with Scott?

L: Scott was very encouraging, especially because I find it hard to learn lines straight away, he was very understanding. Even when he leaves messages on facebook after rehearsals he’s always very positive!

T: I really respect the way that he’s never done anything like this before and he’s written his own script and he’s developed the play himself. To do that at any age is impressive, and to do it at nineteen is even more so.

L: we’re a bit worried about the end of the play though!

T: yeah we think Scott’s gonna kill us off at the end of the play.

[They both giggle about Scott’s elaborate plans] [I hope they’re fictional, but I haven’t checked with Scott]

T: But seriously I just hope people enjoy it, it’s been an enjoyable process. It’s been good for me meeting people that I definitely wouldn’t have met outside of this environment

L: It’s definitely encouraged me to get into it more, I’m up for doing another play now I reckon. I only went along to the audition for a laugh!

How have you found rehearsals ?

L: This sounds really wishy washy because he’s next to me, but I learnt a lot off Tom actually. Just from him having a very intense relationship with the stage, I’ve learnt a lot from him, he’s a very very good actor.

T: it’s about going to that place within yourself and just taking yourself and putting yourself in that character. It’s like just entering an emotion, but it’s more complex than that.

I think my favourite character is Mammy, I just think she’s –

T: I think Becky really, I mean, she has some great lines anyway, but Becky’s really funny. Without Mammy there would be no humour so every time the play plummets to intensity or thoughtfulness, she’s the backbone of comedy that will stop the audience being bored. 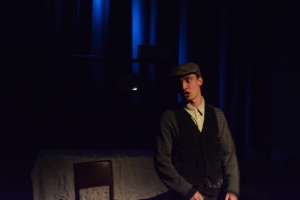 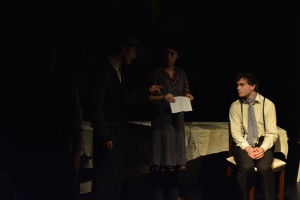 Mark and Naomi, can you describe Johnny and Helen?

N: ultimately they’re the same person, they’re both sad, they don’t understand why Shaun has left,

Okay! Tell me about your on stage relationship

N: We hate each other,

N: Well, I’m a bit annoyed because Scott says they love each other but I don’t think Helen loves him. I just don’t think she has any option, she wouldn’t ever think about leaving but she’s not happy, she’s just settled. I think she just wants a quiet life, which is why she tells Tommy to do what Johnny says, I think she’s scared to lose another son, but she doesn’t know how to show her affection to Tommy which is really sad.
Look at Tom. He is just beautiful, who wouldn’t love him?!

M: I think deep down of course she does

M: No.
Johnny is really sad and really remorseful and he takes out his depression by blaming others. He takes his anger out on them, when really it’s anger at himself because he feels he should have been nicer to Shaun. They are, after all, his sons and they chose to abandon him, he’s never had that kind of rejection before, he has Helen, and he has his Mammy…

N: She can’t use her legs, she couldn’t leave!

You’re both really active within the Theatre Company, how is this whole Festival going in your opinion?

M: There’s loads of extras, which I’ve never really dealt with before, there’s a huge amount of people on stage. So many first years!

N: it’s really cool that there are so many different styles [in the New Writer’s Festival this year], people are really keen to just try anything. Before we’ve had either straight plays or really ‘Queen Maryish’ stuff, they were always a certain style of play, and they’ve become quite different in the last year.

M: I think we’ve done well in a short space of time and not so many rehearsals, we’ve had longer than we’ve had in the past but even so it’s not a lengthy amount of time. The set and the costume is what I’m most impressed with, it’s so detailed, it’s great.

You can still get your tickets for Sunday (but be quick!) Hope to see you there