Our Shaun – a play by Scott Roberts

My friend Scott (who I interviewed for Flatmate Friday here) recently got the amazing opportunity to direct and produce a play which he wrote as part of the New Writer’s festival at Queen Mary University. I am so excited! I’m super proud of Scott and I can’t wait to see his play on stage. Scott let me peek into his auditioning and preparation process, and I thought I would document the evolution of his play as it progresses. (I’ve even got some quotes from Scott so this isn’t all just me chatting) 😉

Scott: It’s a  dark comedy focusing on one Irish family called the McDonaghs. The play all starts on the day of their son Shaun’s funeral, and centres around the family trying to discover why he ran away from home. (It’s a comedy I promise!)

I got the idea after seeing Martin McDonagh’s ‘The Cripple of Inishmaan’, it started as an extension of that story, but then separated into something else. It has the same kind of theme of being in an isolated space, kind of shut away from the rest of the world and growing up in that environment , wanting to get out. (Pictured above and below: A scene from McDonagh’s play, with, above, the inspiration for the character of Mammy!)

I enjoy comedy as a genre but I think it’s one of the hardest things to write, because I’m not a comedian, I don’t have the knowledge of how to tell and formatted joke, but what I like to do is find the comedy in situations which aren’t inherently funny.
Like a funeral?
Exactly!

I think dark comedy in general gets its strength from being closer to normality than regular comedy. I think laughing at something which exists in real life, laughing at truth, is much more powerful. I got that from Simon Amstell.

Cute. Anyway… Scott had to pitch his play to the committee, and then organise auditions and attend the busy casting meeting where each director has to fight for the cast that they want (in case other directors have also cast them!) It’s been a crazy busy week and I’m surprised Scott’s still awake, but it all turned out really well (of course, I’m super excited, that’s pretty much my thing…)

Scott: I was incredibly nervous, (at the pitch night) but I think everyone was. Nervous because it’s the first thing I’ve ever written, it would be the first thing I would ever direct and standing in a room trying to impress everyone is generally terrifying anyway! And also because everyone else’s ideas sounded brilliant and to try and pit what I’d done against other people, I’ve never done that before.

The first audition was terrible because nobody turned up, but we were competing with five other auditions going on at the same time.

The second day was like a gift from God, [laughs] because we had all of the amazing third years turn up, who are like the QM acting legends, and once we met them, they became the people that everyone needed to beat! I actually think that the cast we have is comprised primarily of people from that main audition. There was a shortage of guys which was a bit of a problem, all of the directors were saying that they were having difficulty finding male actors and quite a few of the plays had male leads so we were worried that the guys who we had seen would be stolen by other productions in the casting meeting!

The casting meeting was the most intense meeting of my life, there were discussions in the foyer, everyone joking about who was on their lists, but as soon as we went in the room it became like a serious business meeting! [laughs] Everyone ran through the cast that they wanted, one production at a time, and I think there were only two clashes, which was pretty good! My main one being with the character of Tommy, who is predominantly the main character in the play, and two other productions wanted him as their main character. Eventually, one of them stepped down, and we made a compromise with A Riot Act (another production) to share him. 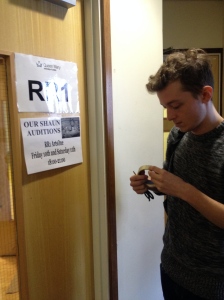 I’m looking forward to sharing the next updates, and in the mean time Scott is working super hard on rehearsals, and we are traipsing to the end of the Central line and back to source rustic Irish clothing (Smocks, pinnies, dresses and assorted bric a brac are gradually taking over Scott’s room!)