This weekend Rob and I went with my flatmates Scott and Chelsey to see ‘The Drowned Man: A Hollywood Fable’, a play produced by the theatre company ‘Punchdrunk’. It was the best, strangest and most confusing yet gripping play I have ever experienced. I say ‘experienced’ because it’s definitely not your average ‘sit in a slightly uncomfortable seat and watch’ kind of theatre.

Scott had already seen it and loved it but wanted to go again so he took me, Rob and Chelsey along with him. I had a vague idea that it was a promenade performance, where we would be allowed to freely explore the ‘world’ of the play, watching the action as we came across it. Scott went on to explain that the play involved two murders, and casually warned us that if the actors pulled us into a different room or approached us that we should just ‘go with it’  (erm!!) At this point it was starting to sound a bit too much like a house of horrors type deal for my liking and I began to freak out a tiny bit but we were already on the tube by this point so I literally couldn’t run away. To add to the atmosphere of death and general creepiness it’s performed in an abandoned warehouse right outside Paddington tube station (Ah yes, an abandoned warehouse, where 99% of victims in horror films meet their grisly ends… Hurrah) 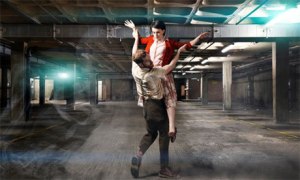 We were ushered inside and asked to check our bags, coats and phones (so we couldn’t call for help?! Okay by this point I’ll admit I was in full on panic mode…) into the cloakroom and then proceed up a ramp and through a black curtain. I was first through the curtain into a pitch black corridor, and had to lead everyone through the twisty hallway illuminated by creepy red lights, while gripping Chelsey’s hand for dear life and trying not to collapse from pure terror (I’m a real wimp, I know, but dark tunnels are so not my thing). Anyway, we eventually reached a much lighter room where there were already a number of other audience members, and were handed masks to wear, which are used to distinguish the  actors from the audience. Of course these had to be creepy-ass plague doctor beaked masks, meaning that I was now terrified by every single audience member, including myself, and Rob.

We were ushered into an elevator where an actor welcomed us to ‘Temple studios’ (the fictional setting of the play) and encouraged us to ‘ditch our friends’ (they advise wandering around by yourself so you can go where you want ) and take a look around the studio and surrounding woodlands, reminding us to be completely silent at all times… 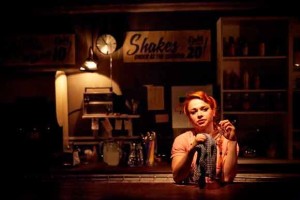 The elevator deposited us on the bottom floor of the warehouse and we were left to our own devices. The warehouse itself had five floors, and each floor had several different areas to investigate. My favourite was an incredibly detailed  ‘high street’, with a working fountain and several store fronts. The shops were were all open to go inside and poke around, and every desk drawer was filled with paperwork, all of the posters on the walls and all of the items for sale were carefully placed and looked entirely authentic. My favourite part was one of the shops which had a small cupboard at the back. You could go into the cupboard and push through some coats and keep on pushing your way through the coats, entrance-to-Narnia-style, occasionally encountering other masked audience members, (having a terrifying beaked figure loom at you from behind a fur coat will kill any joyful Narnia daydreams you may have been experiencing…) until emerging into a large secret room where there were some more hidden passageways, and a photographic dark room where an actor appeared to be plotting evil deeds (although he could have been developing photos, it was hard to tell). 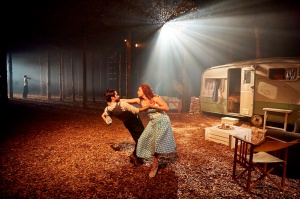 There was also a ‘forest’ complete with a mossy soil floor and dense tree trunks, where lots of caravans were parked, a film studio, a bar, a church, several houses, offices, a gated compound, and on the top floor a beach area complete with sand dunes, and also a creepy ass shrine where an actor who seemed to be playing death would occasionally hang out performing strange incantations. I treated this actor with deep suspicion and refused to take my eyes off her at any time while I was on the top floor in case she tried any funny business. There was also an entire level filled with snow and ice which Rob and I only discovered right at the end of the show, although I have no idea how we missed it.

The idea was that the actors would play out the storyline, a tale of jealousy and murder in a Hollywood film studio, travelling from location to location as their character would do naturally. For example, there would be a big fight in the bar, (oddly accompanied by very intense barn dancing and ending up with someone hanging from a chandelier) and then each of the actors would run off, some to their homes, others to the beach, and others to the forest or the studio, and you could choose to follow the story lines which interested you most, often having to really chase the character you were following as they ran off to continue their story! After a while, you could wander off to a different part and join up with a different story line as all the action was happening simultaneously across the warehouse, as it would in real life. Occasionally I would look up and see a troupe of audience members running through the forest in hot pursuit, or actors wandering down the high street being shyly trailed by a couple of masked figures. 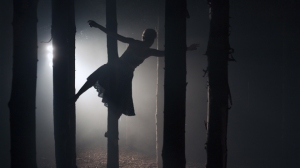 There was obviously a very deep plot of love, loss, betrayal and murder, but I have to admit that I completely failed to follow it. This didn’t really matter though! Rob stuck with me to be my bodyguard so I could boldly wander around without fear or trepidation, and we explored all over the whole place, stopping to watch scenes where we came across them and then following the most interesting characters to their next encounter.

All of the male characters seemed in the habit of expressing their feelings of pain or angst or whatever by writhing around in a kind of interpretive dance way, (whatever floats your boat, I guess) and while watching a scene on the ‘beach’, one of the male characters stripped naked in a particularly dramatic writhing sequence. (I knew there was nudity in the play because Scott mentioned it, but Rob didn’t, and was a little shocked, hehehe) The naked writhing man was then ‘fetched’ by the actor who seemed to be playing death, and, in a pretty surreal but aesthetically pleasing turn of events, lead off to have a bath in the church. (Followed by lots and lots of eager girls and one reluctant Rob). It sounds really weird now that I’m describing it, and it was definitely a bit strange at the time, but you kind of had to go with it. Rob and I spent a really long time standing in a milkshake bar watching characters come and go and have disagreements and secret trysts, and we once wandered into an empty room and found two ‘corpses’ lying on the floor. Lovely. 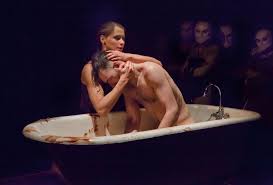 At the end, all of the story lines converged in the forest area for a dramatic finale and all of the audience got together to watch the final bows (although I can’t help thinking that some audience members must have been busy exploring elsewhere, completely oblivious to the fact the show had finished…)

We emerged and met up with Chelsey and Scott again, completely overwhelmed by our three hours of submersion in the world of the Drowned Man and eagerly sharing stories. They obviously had had such a different experience of the play and saw things that we missed while we were watching stories elsewhere. (“It was so funny when that cross dresser took off his stockings and streaked through the forest” “Umm…”)

It was a perfectly timed, perfectly smooth, completely immersive and interactive performance which I would happily go and explore again! It’s running until the end of February (and it may run for even longer if Punchdrunk extends the run), and while full price tickets could set you back up to £50, concession tickets are available for as little as £19.50, which is money very well spent (as long as you enjoy chasing naked men through the forest… and who doesn’t enjoy that?) 😉 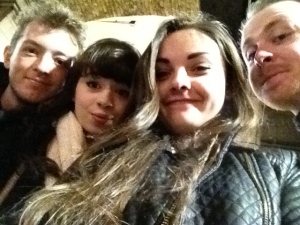 One thought on “The Drowned Man”