I don’t even know what day it is. I’m gonna be honest, I don’t really care, because The Blue Room performance is tomorrow! (Or, maybe, today now?!) Argh…

I may or may not post about it. Abi is coming and she is going to pretend that it went perfectly even if it didn’t, like the old school romantic that she is. 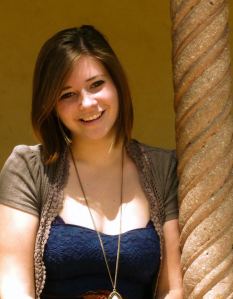 K: I am Kate Finlay, I am American and I am from San Francisco

PV: Awesome! What are you doing in England?

K: I am studying here for a semester, in London because it’s wonderful [laughs]

PV: Okay, a few introductory questions… What has been your favourite thing about London so far?

K: I think how exciting it is. I like how there’s always something to do. I’m from the suburbs of San Francisco so I’m used to small towns, all you can do is go to the movie theatre or the mall and get frozen yogurt!

PV: Frozen yogurt is great though!

K: Every suburban kid in the states has so much frozen yogurt, it’ll like all we eat basically. [laughs] But yeah, there’s so much more to do here, there’s theatre, there’s exciting things to do on a night out and there’s big history. I love the history of England; where I go to school, part of the school is eighty years old and it’s an official Californian historical landmark, but something that’s eighty years old here is a new building! So, I like that there’s actually history here.

PV: Awesome, so what are you studying?

K: I am studying psychology and computer science.

PV: Can you give us a brief explanation?

K: I came into school thinking I was going to be an Art Therapist, so I started taking all my psychology classes. And then one of my best friends conned me into taking a computer science class – I thought he was crazy, I told him I’d try it for two weeks and then drop it. But then I found that computer science wasn’t just a person sitting in a dark basement writing code all day long and giving themselves carpal tunnel, it was actually puzzles and problem solving and really interesting applications, and it also meant that when I graduated I might be able to work for a cool company like Google where you have slides instead of staircases and people who do your laundry for you even though you’re forty. [laughs]

PV: So what kind of company do you want to work for? Am I right that you want to design user interfaces?

K: I do! There’s a new field called human computer interaction which is starting and I’m really excited because it basically is like ‘how do people interact with their computers?’ and that’s where a user experience person comes in and makes them easier to use, makes them better and more beautiful, and like, makes it so that your Grandma can use an iPhone and not kill herself.

PV: Always useful.
I really want to talk to you about some specific things, but first of all, would you identify yourself as a feminist, or do you think you’re just a person with common sense?

K: I would say that defining yourself as a feminist is a bit of common sense. Because, I would say that most people talk about feminism like it’s full of bra burning, no leg-shaving angry feminazis. But the more I talk to people the more I realise these are all stereotypes in their heads, and they don’t actually interact with people like this. What feminism really means is believing in equality and believing in equal opportunities and believing that a guy and a girl should be born in a world where they can do whatever they want.

PV: Talking of which, obviously you’re doing computer science and you’re a girl. I know how difficult people find it to get their heads around that, have you found that at all?

K: I definitely find that. One of the top engineering schools in the states have this thing called ‘the Dave to Girl ratio’, where they found that they had a problem with women being underrepresented in computer science, because they had more Dave’s than they had girls. Luckily, the school I go to in the States is fifty-fifty in the computer science program; they’ve made a big effort and a big push.
Part of that started with separating people out into different groups, so that in the ‘intro’ course it’s not the boys who have been going to computer camp since they were five, and the girls who feel like they’re inexperienced because they’re with those boys. Instead there’s a beginners class, an intermediate class and an advanced class.
But I do find that, because I like wearing dresses, I like wearing scarves and I like wearing makeup, I have been asked a couple of times when I’m in the computer science building if I’m lost. I’ve been lucky because I haven’t experienced much discrimination, but talking to people who actually work in the field, it gets a lot worse!

PV: Talking of feminist issues, in the States and in England, right now, what is your “we still need feminism because…”

K: Well, I think that women are still being encouraged to go into under-performing fields, and when they get there they get a lower salary than their male peers. Then they are expected to drop everything and have a kid, and whether they do or not, they get criticised for it. If they stay home and have a kid, they’re lazy, if they try and work and have a kid, they’re distracted, if they don’t have a kid they’re selfish. There’s nothing they can do that’s okay. I think that’s a big problem. We need to respect our mothers and we need to respect people who don’t want to be mothers, and see them the way we see fathers! Whether you have that choice or not, you are an okay person and we will pay you the same and respect you the same!

PV: That is so important. Something that has been all over the media lately and has been highlighted as a feminist issue: Blurred Lines. I struggle to explain to people why the lyrics are so ‘bad’, I just know that they are and it makes me uncomfortable. Can you explain to us why it is such a ‘bad’ song.

Blurred lines, which you can watch below, has been in the headlines lately as it has been suggested that lyrics  such as ‘you know you want it’ ‘you’re a good girl’ ‘let me domesticate you’ and several other even more graphic lines are inappropriate and glorify non-consensual sex. This parody (below) is fantastic –  meant to be what the song would sound like if the gender roles were reversed! Warning: Neither are suitable for little eyes or ears!

K: I think a lot of it centres around the fact that it’s about blurring the lines between consent and non-consent, which is rape. And it’s about the objectification of women. A lot of it is how it’s interpreted, and that is an important point to make. If you look at the lyrics, yes it may not be the worst song out there, but at the same time, at our school they had a tribunal about it and lots of victims came forward and said “These are words my rapist said to me. Now, if I’m in a club with my friends I suddenly find myself crying in the bathroom because I’m reminded of the time I was raped.”  Now for me that song is just another song I hear on the radio, but it hurts a lot of people, like these victims, and if we would stop playing it, it would save them pain and the rest of us wouldn’t be affected.

PV: So, you have a lot of really interesting things to say about women’s issues in general, as we’ve heard, and you go to an all-women’s University in the States (Scripps College). How is that different? Do you feel that it’s made you ‘more of a feminist’?

K: It’s an interesting environment, there are a lot of all-women colleges in the states and many of them are in the wilderness, away from anything. That’s not the way our school works, five schools share our campus, and the other four are co-ed. So we have our own section of campus and we have all-female dorms, but most of our classes are co-ed. So I’d say that my education and my classes are a little more slanted towards women’s issues, and I am surrounded by a lot of really inspiring women who chose an environment where they would be able to focus on themselves as women, and helping other women who need help. So I think because of that, it has made me more of a feminist, but it’s also made me better educated as a feminist, I think that’s important. But there are men on campus, and I don’t feel like I miss out on that experience of talking to both men and women and feminists and non-feminists.

PV: So, you, like all of the coolest people, took a Gap Year?

PV: What did you do?

K: I spent the first two months of my Gap Year working as a housekeeper at a retreat centre, which was basically a hippy commune [laughs], and then I went to Greece and I did art school for three months, learnt how to paint and draw and live on a Greek island. Then I spent my summer in Peru working for a school.

PV: Peru! When you were in Peru, what did you learn from being in a place that is so different from Westernised countries?

K: I liked being there for a while. Because I’ve been to Ethiopia and Honduras before which were other impoverished countries and I kind of felt very “I am different, I am other” and I still felt like that in Peru, but having some time to get a little culture and have a routine, I started to see that there are different ways of life, and it’s okay. Sometimes the kids, who are really in poverty, are happier than US kids. I think in the West people kinda want to go in and say ‘let me tell you how to live’, but people don’t want that. It made me sad how (historically) Spain came to Peru and just threw everything away, more of that ‘this is how you should live… We’ll destroy your amazing structures, we’ll hide Machu Picchu…’

PV: What made you want to travel in the first place?

K: I was deciding whether I wanted to do Art or not so I wanted to have that experience and then see if I thought I could do it for the next three years, or even longer than the next three years, and that’s I went to Greece. I found that I love art, but I don’t think I could do it for the rest of my life. I came to London because I love to travel and I knew I had to study abroad, and I also had to finish my major, and I wanted somewhere really exciting, so here I am!

I then made Kate tell me an absolutely hilarious story about her work at the hippy commune, and her encounter with a slightly unhinged self-styled-lava-goddess, but I have already overrun my normal length for these blogs so next time you see Kate, ask her about Pélé and I’m sure she’ll be happy to tell you the story in person!

It’s been awesome talking to Kate, and living with her! It’s kinda cool that I get to live with all these super interesting yanks (; Thank you Kate!

Hope you found Kate as interesting and hilarious as I do!

← I JUST WANT TO CHECK MY EMAILS: Question Tuesday
The Blue Room →