I’m in the middle of Reading week, and I have to say I’m pretty disappointed. Reading week is supposed to be for reading, sleeping, eating and literally nothing else. Imagine my horror, therefore, as I found myself doing all sorts of things, including travelling about, rehearsing, grocery shopping, blogging and writing essays. Grr.

Talking of rehearsals, they’ve been really intense and super exciting this week. The play, The Blue Room by David Hare, consists of ten scenes, each focusing on a male/female relationship. Girl A and Boy B have a scene together, and then Boy B and Girl C and then Girl C and Boy D, and so on, until Boy J and Girl A have the final scene. David Hare, calls it, quite succinctly, a ‘sexual daisy-chain’. OOooOOooh.

I have two roles in the play (the Au Pair and the Model)  so I have four scenes with four different characters, played by three different actors. 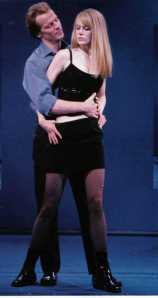 Iain Glen and Nicole Kidman in the Blue Room

Luckily, we’ve mostly side stepped the hideous awkwardness of having to do anything actually sexual on stage in front of people, and our awesome third year directors have choreographed a sequence of movement in the relevant places. This is actually better, in my opinion, than an ambiguous ‘fade to black’ stage direction, and it adds physicality to the different relationships in a way which is appropriate for people to come and watch without feeling violated. I was sort of expecting it look a bit silly, but it looks sort of interpretative and edgy. Love a bit of edgy. It actually normally ends with us twisted into various positions while the directors jump around and laugh and make comments like ‘that’s horrible! I love it!’ They’re great (: 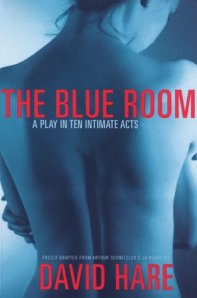 Despite this, there are obviously still moments of intimacy in the play, and CAN WE JUST TALK ABOUT STAGE KISSING? Remember when you used to play truth or dare when you were nine years old? And how awkward it was when you were dared to *gasp* kiss someone on the lips. Maybe it’s just me, but it is still that awkward! Yeesh. Obviously, you just have to suck it up and get on with it but I’m definitely cringing inside like a nine year old girl.

On a more serious note, Abi made me a playlist and sent it to me on a CD like the old school romantic that she is, and it is the best playlist ever to have been compiled. It reminds me of being in secondary school, of awkwardly knowing all the words to that song, of TV shows we used to watch together and going batsh*t crazy in a tent in Reading. It is made of awesome.

I challenge you all to find a song which reminds you of something which you had forgotten, or of being somewhere or something that you haven’t thought about for a long time. It might be fun.

My song of the moment is One Day, it reminds me of Freshers week and rehearsing for The Blue Room.