Our flight from Tokyo was pretty smooth and after a brief stop in Beijing we were on our way to Bangkok. The flight was quite turbulent, and even though I am not at all afraid of flying, I tend to think myself some sort of airplane expert and confidently diagnose all sorts of fatal errors with the plane. The monologue in my head went something like this: “Ah yes, that buzzing noise is a sure sign of engine failure, we’re all going to die” or “I’m sure the wings shouldn’t be wobbling like that – death it is.” Or “the co-pilot running down the plane like that is surely indicative of an imminent catatstrophe, and before dinner too, what a nightmare…”
(said co-pilot turned out to be running keenly to collect his and the pilots’ lunch, so that explains that one…)

For this reason, I find flying pretty tiring, and it was nice to be met at the airport by a friendly Real Gap representative who spoke great english and seemed to know exactly what she was doing. There were six of us being picked up from the airport at that time (early evening) and after marshalling ourselves and collecting our bags, we headed out for our first taste of Thailand.

It was hot and muggy and loud, and the roads were busy and lined with shanty houses. When we finally arrived at our hotel we gathered in the dingy reception and were given the keys to our rooms. I had to stand on the toilet cistern to plug the gaps in the bathroom window for fear of mosquitoes, and Rob and I dragged the worn blankets off the bed and slept curled up under our AirChina blankets instead.

It wasn’t until the next morning, when I crawled off the bed at 6am to get some water, and saw the pale morning sun shining mildly through the gaps in the blue curtains, and heard the sounds of early-morning city life, that I really began to love this country.

We had a busy day ahead and our trip co-ordinator/ buddy, Moon, collected us all up after breakfast and introduced us to Ping Pong, our guide for the day. He took us on a rapid walk in the incredible heat, pointing out the most important monuments along the way in his crazy, super-knowledgable style. We soon arrived at the Grand Palace and I was blown away by the intricate mosaic tiling of every dome and pillar and glitterring spire. Ping-Pong’s english language skills occasionally desert him, but he did a great demonstration of the incense and holy water traditions, and gave us an enthusiastic if confusing tour of the palace.

He then marched us cheerfully on to Wat Aran, the Temple of Dawn, where we climbed the near-vertical steps with Moon, who was screaming, while Ping Pong stood on the ground laughing his head off and calling “Don’t fall! Hospital expensive and I no pay!”
We had a great view of the river, which has been made considerably narrower by the houses which have been built on stilts all along its edges. Apparently the wooden stilts have to be regularly reinforced, and although the houses are very cheap, the residents have to use the filthy river water to bathe and wash clothes. (Ping Pong said: “The river is so dirty, I used to swim in it when I was a boy, and now I am dead!”, followed by hearty laughter) 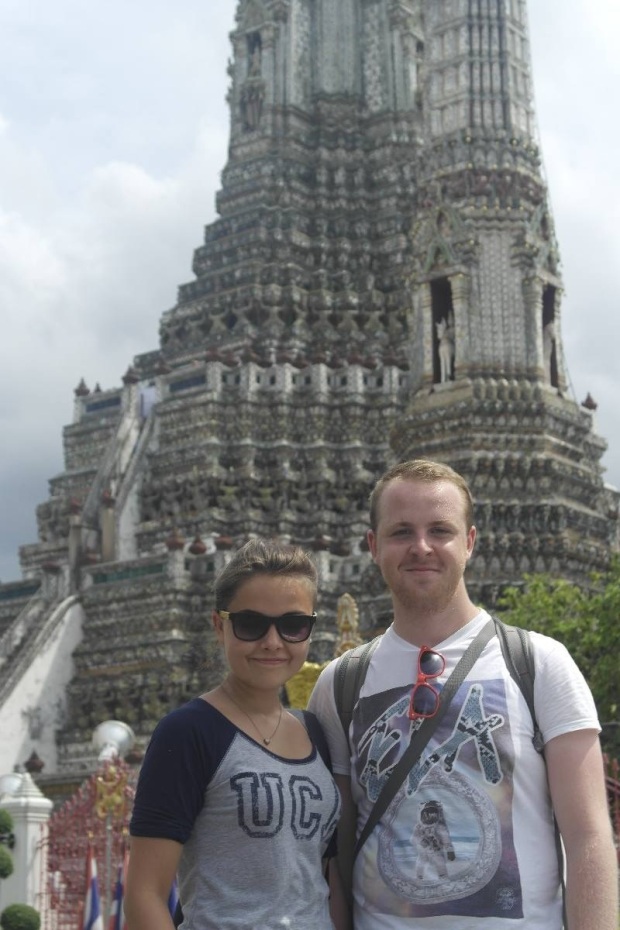 We walked reverently around the reclining Buddha in Wat Pho, and Ping Pong taught us how to find our Buddha action depending on our date and day of birth. The reclining Buddha is essentially a massive golden statue of the Buddha lying on his side, and it is incredibly impressive. They give out robes so that women can cover up if their legs or shoulders are showing, and you also get free water with your entrance ticket. They are very welcoming as long as you follow the rules of dress and behaviour, and there are big signs all over urging people not to ‘disrespect the Buddha by using his image for tattoos or furniture’. I don’t think they would have appreciated the Hello-Kitty-dressed-as-Buddha phone charms for sale throughout Nara in Japan.

Ping Pong flagged down some long tails for our trip back to the hotel. They are skinny boats similar to gondolas, powered by a slightly rickety looking engine. We powered down the river and got to see the housing and the floating market, and lots of locals fishing in the black water. They have huge water monitor lizards which apparently eat cats and dogs, and you can see where whole buildings with rotten stilts have collapsed into the river. We passed a few cafés full of locals and I was surprised to be greeted with smiles and waving as we passed! It is very different to Peru, where even children would ask you to pay to take their photo, or treat you with suspicion if you just happened to be holding a camera.

Ping pong sent us back to our hotel (“go, and wash your bodies!”) where we gladly showered and enjoyed the total luxury of air conditioning.

That night, the infamous Bangkok strip and the local Chang beer did much to help us bond as a group, and we are all pretty excited to head to Cha Am in the morning.