Our hotel in Nagoya is situated just a few blocks away from the centre, and wandering aimlessly in almost any direction will bring you to the neon jungle. On our first evening we went exploring and ended up having dinner in a Japanese fast food restaurant where you buy food coupons from a machine and then take a seat, handing over the coupons to recieve your meal. This is my favourite way to eat food: with no human interaction. Except when my server tries to discuss my rice choices and I have to stare at him with a blank look of terror until he takes pity on me and trundles off to cook whichever rice he thinks is best. 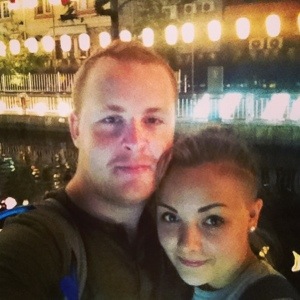 The next day we headed off bright and early (according to me. Rob doesn’t think that 9.30 am is notably early…) to Nagoya aquarium. I realise that we just went to an aquarium, but this one had Beluga Whales, Orcas, and a series of freakishly talented dolphins, so we figured it was worth a visit. It turned out to be incredible, we watched the larger mammals for ages, and then the dolphin show. The dolphins have an incredible intelligence which allows them to learn and remember super complex commands, and makes me very glad that they don’t have opposable thumbs (or, hooves, for that matter…) 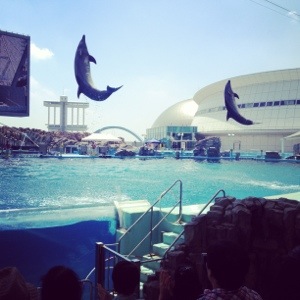 After passing through the south pacific and antarctic areas the outside world was unbearably hot (I’m not going to stop complaining about it! It is 30 degrees here, at night.)

We headed for the famous shopping district of Osu, and, after crouching, vagrant-style, on some steps to wolf down some noodles, we got stuck in.

On the top floor of a fancy department store we found a yen=g store selling second hand clothes. The concept is pretty cool. This part of the shop is split into four sections; ￥4 ,￥2, ￥1 and ￥0.5, then all you have to do is weigh the clothes, multiply the weight by the section number, and that’s how much you pay. I got a pair of shorts (220g) from the ￥4 section (￥880) and a top (105g) from the ￥1 section (￥105). I actually got Rob to do the maths because I was too busy digging through the baskets of clothes, there was a ton of good stuff but I had to narrow it down. I only managed to stop myself from buying a few pieces because I heard Rob whisper ‘ew’ under his breath from behind me…
This is the best way to shop that I have ever seen, but if your idea of a good time doesn’t involve maths and pre-loved clothes, Osu district has plenty more to offer!

We didn’t hang around for long though, by this time it was getting dark so we did some night exploring and saw a beautiful wooden shrine and the gorgeous Oasis 21 bus terminal. Oasis 21 is a sleekly designed terminal, and the top layer, aqua spaceship gives a great rooftop view of the city at night. 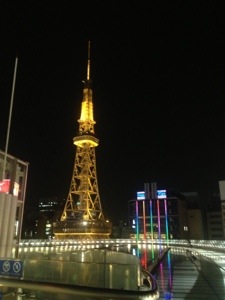 I recently finished the third novel in the Hunger Games series and this kind of night exploring makes me feel all cunning and lithe, like the main character, Katniss.
Then I remember that I recently fled from a baby deer, and decide that perhaps I am nothing like her after all.

We had an early start on our last morning in Nagoya (according to Rob. I think 7am is a preposterous hour, as far as I’m concerned, it’s still night time) and headed to the science museum. I’m not gonna lie, whenever I hear those two words, my ears prick up and I quietly think to myself: gee-I-hope-there’s-an-interactive-zone-where-I-can-make-a-tornado-by-spinning-a-wheel. The awesome spherical building didn’t disappoint and Rob and I spent the morning pushing buttons, pulling levers and playing with mirrors.

Due to recent budget cuts, we had to take a not-so-speedy bullet train back to Tokyo, which I feel is a little more pedestrian, but at least we got to stop at every single city between Nagoya and the capital…

I feel like most of what I’m writing about isn’t that specific to Japan, you can watch a dolphin show in Florida, there are science museums in Ontario, and you can just go to London to ride the subway. It’s definitely the small differences which make Japan such a foreign and interesting country. Here, it is usual to stand on the left for escalators, and form an orderly crocodile to queue for the subway trains at peak times. Women wear high heels seemingly 24/7 and, even in this heat, lots wear long gloves to protect their pale skin from the sun. In shops, you have to put your money into a little tray and they hand you your change with both hands as a sign of respect. The girls and young women have a really structured, distinct way of dressing but retain the universal look of different but not too different. I don’t think I’ve seen a single phone without a case or colourful charm, and although I’ve barely seen any loved up couples, I’ve seen plenty of Mums and Dads enamoured with their little ones.
Of course, I am by no means trying to say that Japan is better or worse than anywhere else because of these differences. Just as I love London because it is dirty and grey, and I love Londoners because they are insular and autonomous, I am loving Japan for all these things which make it a unique country. Japanese people in general have been super kind and hospitable towards us, we have stayed in three different cities and each time we have been shown to our hotel (literally walked to the doorstep) by a helpful passer by (once a shop assistant who we had asked to point us in the right direction wandered off the job to escort us to our hotel a couple of streets away).

Back to Tokyo now, where I am going to eat delicous fresh Japanese food until I am sick. 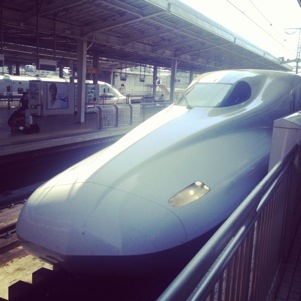