After a final day in Tokyo checking out the Shibuya district (100￥ shops, the best ever Katsu curry and the famous scramble crossing), we took a bullet train south to Kansai province, Osaka.
There’s nothing that says ‘travel’ like running around a subway station under Tokyo, (at a sweaty 32 degrees) with a huge bag on your back, trying to first purchase tickets for, and then locate, the train you need to be on. But it’s all fun and games, and the slick two hour journey on the bullet train is more than enough time to chill out, cool down and watch the world go by. (Although the latter may give you whiplash as the Shinkansen travel at a swift 326km p/h!) 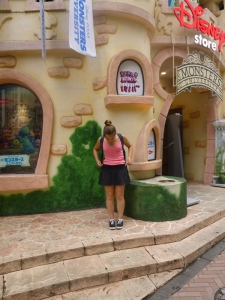 The impressive Osaka aquarium was something we were super keen to visit (if only for the brutally efficient air conditioning…36 degrees and rising!) and it is so worth the visit. The structure allows you to look into the same tanks at three different levels. On the surface you can see otters, iguanas and capybara frolicking, sunbathing and… sitting doing absolutely nothing、while one floor down, you can see the otters shooting down through the water, cutting swathes through the huge schools of tiny fish, and watch as brightly coloured tropicals dart about. (You can’t see the Capybara on the sub aquatic level because he is still sat on the surface, doing absolutely nothing.) 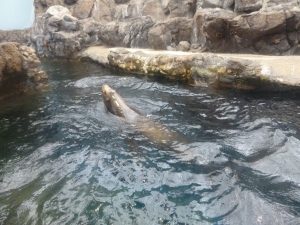 Sea Lions on the surface… 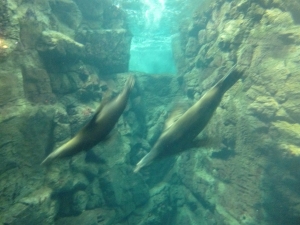 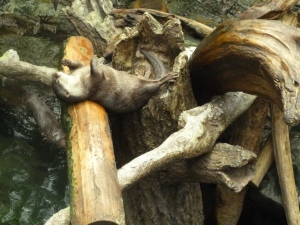 Otters! (These were my favourites) 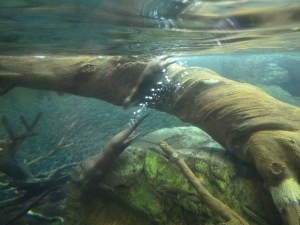 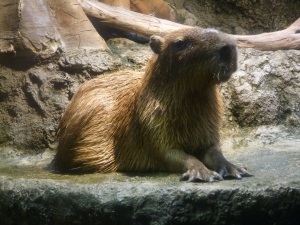 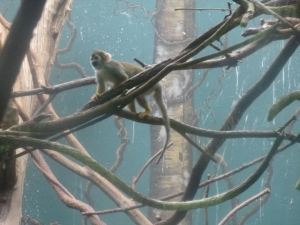 We were then ushered very politely down an escalator to the lowest floor where you can see deep sea monsters and jellyfish. Although the ushering itself was pretty pointless (there was literally nowhere else to go apart from down that escalator, unless you wanted to turn around and carry on hanging out with that famous party animal; the Capybara…), I appreciated the reverent politeness which I have seen in train stations and supermarkets too. Characterized by the quick bow of the head, it is just a short exchange of mutual respect which I have never seen in England. Unfortunately, I am not always sure which party is supposed to start or finish the bowing exchange, so I end up bobbing up and down continuously in utter panic, terrified of causing offence. 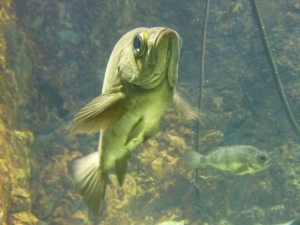 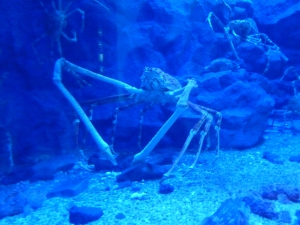 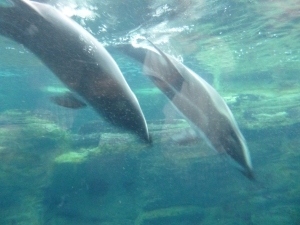 We spent hours in the aquarium, joining the flow of excited Japanese children rushing to peer into each tank.
When we finally emerged, it was even hotter and ridiculously humid, so we wandered around rather slowly for a while, and then ducked into a ‘familymart’, our trusted supplier of awesome on the go food, which, fortunately, seems to have a branch on every street corner in Japan.
We stocked up on sticky-rice triangles, which they sell with a variety of fillings (always a kind of roulette to see what the fillings will be, seeing as we have no idea what the packaging says! Today it was chicken but tomorrow it might be raw fish, I am a woman on the edge…) These were bought with much maniacal head bobbing before we left the air conditioned sanctuary and headed back out into the Osaken heat. 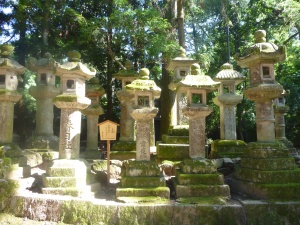 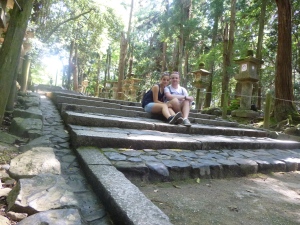 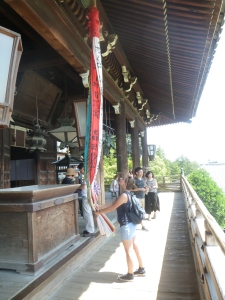 We took a day trip to Nara, which is just a half hour train ride from Osaka, and, despite the fact that is currently so hot they are broadcasting warnings on the news (and humid too!) We doggedly trekked around the huge national park in the baking sun. It was actually a really unique and lovely place, full of brightly coloured shrines and ancient pagodas. One of my favourites was the Great Buddha which stands in its own temple and towers benevolently over worshippers, schoolgroups and footsore tourists. It is so impressive, and sits with an air of bulky serenity which is hard to imagine in such a large statue. Behind the statue, in one of the great wooden pillars, there is a small tunnel, and the story goes that anybody who can crawl through it will find enlightenment. I didn’t try because I am quite fond of my pelvis (and because I don’t believe that the path to enlightment begins by getting stuck in a hole and laughed at) but it may please you to know that at least a dozen children,some small teenagers and one extremely determined man are on their way to enlightenment. 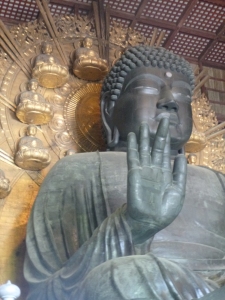 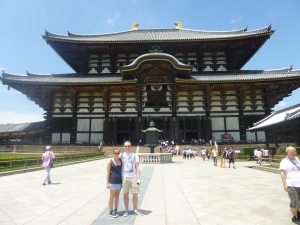 Another charm of this park, reads the Nara City Sightseeing Guide, is the 1200 wild deer which roam around freely. They are so tame that you can make friends with them!
Or, as this WikiTravel article suggests: According to legend, the god of Kasuga Taisha came riding a white deer… so the deer enjoy protected status as envoys of the god; however,based on their current behavior (sic), either the deer have lost the job, or the god has taken an extremely passionate interest in biscuits from tourists… 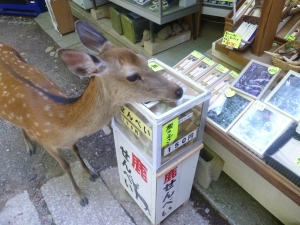 The Deer crackers are sold around the park for 150Yen from small box stands like this one. Clearly, the deer have figured this out! 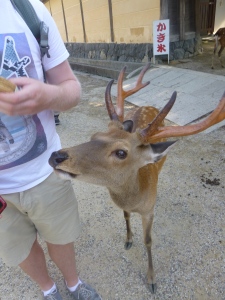 While the deer are certainly very sweet and make a lovely addition to the park, it turns out that my fear of farmyard animals definitely extends to deer. The majestic antlers and small elegant hooves fill me with abject fear and for the most part of the day I could be found quietly bargaining with the deer for my safety, occasionally yelping for Rob to come and rescue me. I wasn’t brave enough to buy the ￥150 deer crackers but Rob was, and he created a small deer-tornado of antlers and wet noses while he fed them. I took photos from a safe distance, and by the end of the day I was even starting to enjoy the deer, (from far away!). 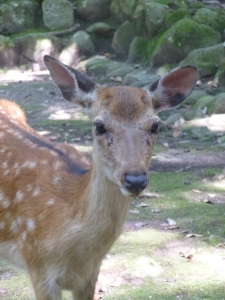 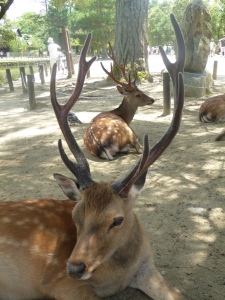 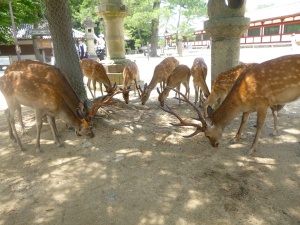 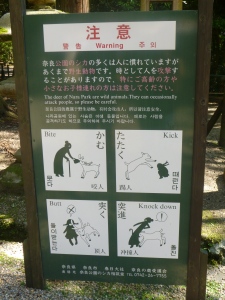 I would certainly recommend Nara, it is a very beautiful and tranquil place – (perhaps slightly better in November or early December when the blazing sun and pressure cooker humidity is replaced with cooler days and blazing crimson maple trees!) – and we had a lovely day wandering around the shrines and wooded pathways of the park.

Yesterday, our final day in Osaka, we gave up on trying to function in the ridiculous heat and headed to the Osaka Jo castle grounds to read, relax and try and find a cool breeze. 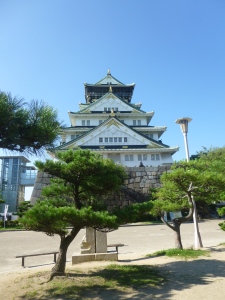 Eventually we rallied ourselves enough to do some exploring and shoppping in the busy surrounding districts and when the baking heat of day gave way to the stifling humidity of night, we took the subway (the inside of subway cars feels like the only place in Osaka which is a reasonable temperature!) to Neon City, or, if you wanna be a stickler; Namba Wark. 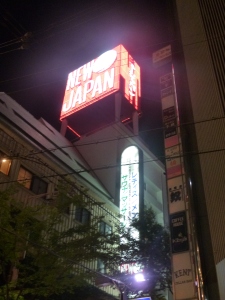 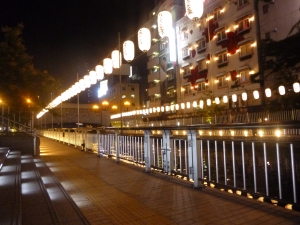 We enjoyed the awesome artificial neon daylight and the ever more ambitous brightly coloured signs and advertisements lining the streets and reflecting brilliantly in the black river.
Small shops full of joyful Hello Kitty souvenirs and Kawaii Kitsch line the walk underneath the lights, and along the centre of the streets are thousands of bicycles which nobody seems to feel the need to lock (probably because it is far too hot to steal a bike…) The atmosphere reminds me of evenings in Italy, (with a bit of an electro vibe!), and I think it`s awesome.

We’re about to get on a train heading for Nagoya, so more Japan blogs coming soon!