Bologna, and this may come as a surprise to many of you, is the ancestral home of Bolognese sauce. I know, I know, the clue is in the name but it took me the whole twenty-four hour stop off in Bologna to make this connection, at which point I proudly announced my discovery to Emily and she looked at me as if I was truly the dumbest person she had ever seen. She kinda had a point. Anyway, we enjoyed the privacy of our hotel accommodation and the famously delicious food before taking the short train journey to Venice. (a journey which would have been shorter still if we weren’t still insisting upon sweltering in hot train carriages to avoid the €10 charge for a train that is both fast and air conditioned… #gapyearmentality) 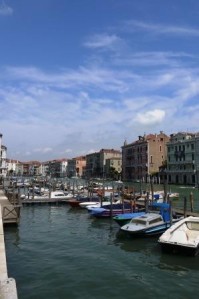 I arrived in Venice with a massive grin on my face, looking around and just falling in love with everything I saw. The canals, the boats, the gondoliers, I have waited so long to come to this city and, in a rare and lovely twist, it was just as I’d imagined. We had managed to book a tiny apartment next to the Rialto bridge, a small extravagance (because all of the youth hostels were full) which turned out to be a great decision. It is so central, we could wander from our apartment over the Rialto and into St Mark’s square, and I finally got to see the famous lion guarding the Basilica, something which, to me, has always seemed to be fundamentally representative of Venice. Pretty awesome. It is very warm in Venice right now and the atmosphere is very friendly. Everyone just seems a little happier here. We gleefully stocked up at the Supermarket and prepared ourselves a meal, enjoying the luxury of having our own kitchen. The next day (the long awaited eve of my eighteenth birthday!) We wandered some more and then caught the Vaporetti to the station to meet Louise, the sister of one of Abi’s University friends. (the Vaporetti, by the way, is not only Venice’s form of a water bus, it is also the reason that I now know how to swear convincingly in Italian, complete with hand gestures – those tourists just love to push) Anyhow, we had arranged to rendezvous with Louise, who happened to be in Venice, so that she could pass along a few of my birthday presents, and I would have something to open the next day. We waited on the steps by the station, as arranged, and suddenly I felt someone approaching behind me, swung around, and was face to face with Abi. I honestly don’t think there is a better feeling than turning around and seeing your big sister who you have been missing like a recently separated siamese twin. Of course I started crying, hyperventilating and making a series of unintelligible noises while hugging the life out of her. It was an amazingly executed surprise (I am notoriously difficult to surprise because I am so suspicious!), the best birthday present I could have received. 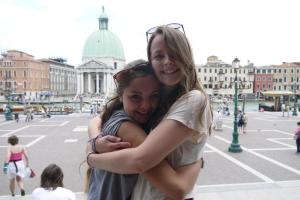 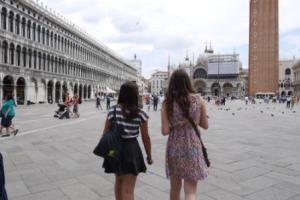 Emily and I spent the rest of the day babbling away to Abi at a hundred miles an hour while we wandered through the streets of Venice. I even attempted to cook Bolognese as a celebration dinner and they were very supportive of my appalling cooking skills. On my Birthday itself I woke them at the very sociable hour of 9am (but only because my phone battery died so the alarm I had set for 5.30 never went off…) and we had a great day in the Venetian sun which included plenty of Gelati (how could I not?!), lovely messages from friends and family and an incredible tour of Venice by speedboat, which is a pretty neat way to see the city. We all put on our glad rags for a birthday meal and processed down to the Rialto where we drank wine and celebrated the fact that I am finally, finally, eighteen. As Rob put it; “now you can do all the things you did before, just with a lot less sneaking around.” 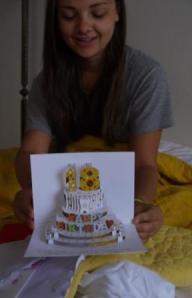 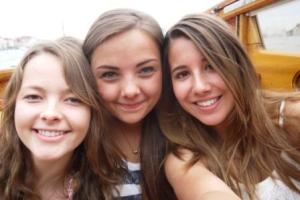 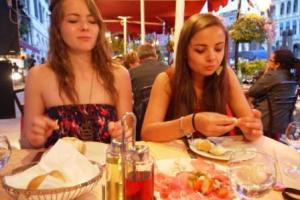 The next day, we explored the islands of Murano and Burano, which make glass and lace, respectively. They were very beautiful, I enjoyed the brightly coloured houses on Burano and the boats and terraces on Murano. However, I had some birthday money and became increasingly frustrated that unless I wanted glass or lace, which I did not, my options were severely limited! I think the islands were definitely worth the boat ride, and it was nice to have some sunshine so that my significantly pastier sibling could top up her tan! 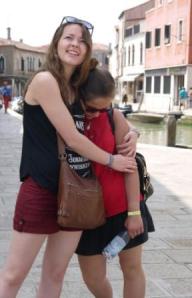 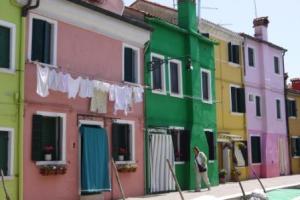 That evening, we said sad farewells to Abi and continued to fair Verona (where civil blood makes civil hands unclean…) I started quoting Shakespeare to Emily about half way through the train journey and didn’t stop until I actually believed she was about to throttle me with her bare hands. MTG, PV x P.S. I. Thank you to Emily again for the photos! II. Sorry about the poor quality, it has taken me literally two hours already just to get them to upload! III. This is my one hundredth post, and I think that’s kinda cool…