Florence is the most beautiful city I have ever visited, and I absolutely adore it. We went to see the real David in all his glory, and it was amazing! It really has an ‘atmosphere’ around it that is hard to describe. You just walk in and you look at it and it’s like it really is the most amazing statue that has ever been created. There is art all over the rest of the building, but I don’t think that anyone looks at it. We spent about half an hour inspecting and objectifying David from every angle, before taking a seat and just staring at him for a while. It is so impressive. 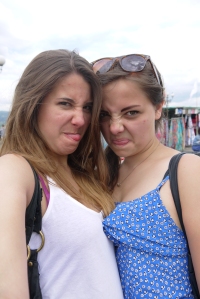 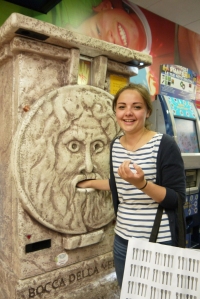 We stayed in Florence for the last few days in a huge hostel, and between the incessant groups of schoolchildren who find the need to shout about everything and block up the corridors, and that one guy who snores for a solid eight hours in our dorm room, we haven’t been getting much rest! Most of our exhaustion is of course entirely our own fault as we have been running around Florence at a hundred miles an hour, only stopping for gelato or huge overstuffed sandwiches.

On our first night at the hostel we met some American brothers, Jeremy and Jordan, and teamed up with them to do some more exploring. We convinced them to visit David and go up the Duomo, and they wandered around with us, chattering away in their awful british accents, drinking cappuccinos and generally making Florence even more awesome.

We went out dancing on their last evening, and it was a very tearful goodbye at the train station the next day, as they were headed to Rome and we were staying in Florence for another day or so. I felt pretty cheated of our time with them – we had become instant friends and we were pretty depressed to return to the hostel alone! Even a daytrip to beautiful Siena didn’t do much to cheer us up. We had a very chilled out day drowning our sorrows in milkshakes and important historical sites, and the sun even came out for a little while. That evening, while returning disconsolately from the supermarket, laden with chocolate and highlighters (I buy stationary when I’m sad…) we decided that good friends/long lost siblings don’t come around that often, and especially not to Italy, and we should go to Rome. Better late than never. We made frantic arrangements and messaged the guys who assured us that they were doing some kind of naked celebration dance around their hostel. We got it all sorted, and were so emphatically grateful to the lady at the train station who exchanged our tickets that I think she was a little scared. 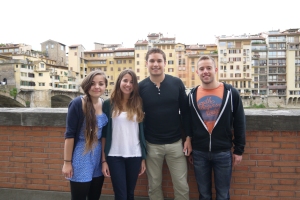 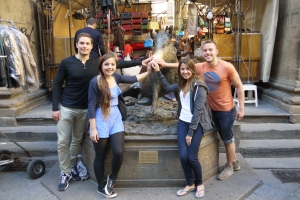 Anyway, dear friends, that is why I am currently sitting smugly on a train to Rome, reading my book (an awful novel about a ridiculous detective who just makes stew all the time…) and looking forward to our emotional reunion 🙂

We left the hostel quite happily at the crack of dawn this morning and the guy in the bed opposite woke up from his eight hour snorefest and gave us the dirtiest of glares, for having the audacity to disturb his slumber!

One thought on “3.3 Florence and Siena”