We only had three days and three nights in New York, but I’m so glad that we made the stop. From the first time we stumbled out of our apartment into the harsh light of a day in the Big Apple, I have loved this city.

Slight awkward moment when we stepped out the Subway station and had to ask ourselves “er – which one is the Empire State Building?”

London is my favourite place on earth, and in a way coming to New York felt like coming home for me. The subway is confusing (the map is ridiculous, give me the tube any day of the week) and the people are excessively friendly, if they bump into you they actually apologise, and if you ask for directions, you practically get an escort and a guided tour to the place you want to go! I am far too British to accept this type of kindness!

We actually arrived on Monday after a horrible plane journey. It was a night flight, but it was so cold and uncomfortable that I actually ended up curled up on the floor underneath my seat, trying to get some sleep. Dignified. (And not what I call ‘Economy Plus’! I was outraged!)
Anyway, we then proceeded to get stuck in the Subway for two hours due to suspected terrorist activity*, during which time I genuinely believed I was going to die, and could do nothing but shift nervously and bite my lip. Also, dignified.
I didn’t die, and we had bagels, so it all turned out better than expected.

The John Lennon memorial in Central Park.
“You may say that I’m a dreamer, but I’m not the only one…”

I know there are a lot of famous, must see sights in New York, and we saw a lot of them, but mostly we got ridiculously excited when we saw shops or buildings or candy bars that we had ever seen or heard mentioned in American TV shows. We went to Macys and Tiffanys and we ate a lot of fried food, and photographed everything. We probably could have passed as New Yorkers if we never opened our mouths, but I think the illusion would have been shattered when all three of us stopped dead on a busy intersection, took out our cameras and started gawping and taking pictures… “look a taxi!” “agh, Planet Hollywood”  “oh look at that strange man!” (the latter is an example of when we forget that we are no longer in Peru and can no longer loudly discuss people under the protection of the language barrier… awkward) 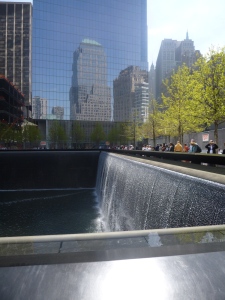 We visited the 9/11 memorial. I think that it was very important to go and pay our respects. It was a very upsetting experience, and the extent of the tragedy and the effect that it had was heartbreakingly plain to see. It has been twelve years since the terrorist attack, and I still felt like I was walking on an open wound. There’s really nothing I can say at this point, but I would certainly recommend visiting the memorial if you are near New York. It is a beautiful site, and a “beautiful tribute from the heart of the city of New York to the workers who perished in the towers, and to the first responders who died doing their sworn duty.”

I really can’t give you, (and wouldn’t dream of subjecting you to!), an account of each day, but if you take out the bits where we were lost, sleeping, or eating… there are certainly a few highlights. A comedy club on Broadway, channeling Carrie Bradshaw in a fancy ‘one size fits all’ boutique, and eating bagels. Lots and lots of bagels.

Anyway, the time was over much too soon and we got on yet another awful flight (I really should write a letter or something).

I am so grateful to have travelled. I nearly died in Peru**, I very nearly  got a tattoo in New York, (I have yet to tell my parents both those things…) I nearly or almost nearly, or really did do a million other things, and I  truly had the time of my life and all that, but I am happy to be home and clean and warm again for a little while.

I’m signing off for a few days. Thank you, for listening.

*Suspected, by me. But after the tragic events in Boston, I was making an educated guess, and completely scaring myself to death.

**This is an exaggeration. But I did stop breathing. And for a very long moment Kati thought I was dead.