Hello again. Apologies for lack of posts! We were hibernating pretty seriously for a couple of days after the Inca Trail, and the only reason we eventually emerged was because we had a plane to catch. We left Cusco for the last time, and flew back to Lima, where we started from. (just over a month ago!)

Since then, we have been exploring the city and generally filling up our last few days in Peru. While we are out the staff at our hostal invariably clean our rooms (read; hide our stuff in increasingly unlikely places) so there is never a dull moment. 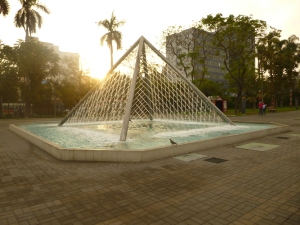 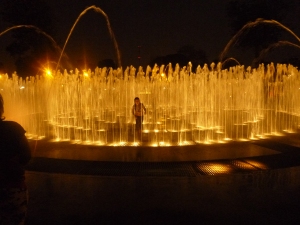 The day before yesterday, we explored Lima Centro, which is the original part of the city, and then went to this huge park in the centre where they have water fountains which light up after sunset. It´s honestly like a theme park (where the theme is water) and it is very beautiful. Anyway, we knew that the big fountain/light show began at seven-thirty pm, so we were wandering around, and eventually stumbled across some chairs set up facing the largest fountain. We assumed we were in the right spot and sat down in the front row. Suddenly, lots of official people started wandering around, and we noticed lots of people in tracksuits with the names of different countries written on the back. It was about this time that we noticed there was a podium and a spotlight set up in front of the assembled chairs, and it was also about this time that we decided to scarper. However, we were pretty intrigued, so we hung around the back of the chairs for a while, and not two minutes later, the chairs where we were sitting filled up with men in suits and the tracksuited delegates from seemingly every country in the world. We were completely bemused, until a voice from the podium welcomed us to the “Opening Ceremony of the 49th Annual Weight Lifting World Championships.” Oh. We were in hysterics all through the three speeches and the parade that followed, but afterwards we got to watch the water show with the weight-lifting-world-champion-hopefuls, so that was pretty cool. Just as we were leaving, a group of the kids ran up to us and asked to have their photos taken with us. We tried to explain that we weren´t celebrities, and we certainly weren´t weight lifters, but they didn´t seem to mind. It was a bit of a surreal night. 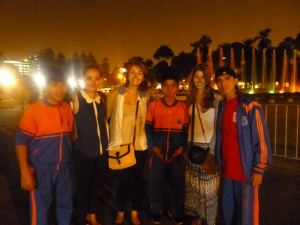 Note: There were about thirty kids and they each wanted a turn at having a photo! 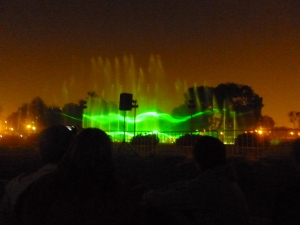 The next day, we took The Longest Bus Ride Ever into the desert (it´s actual name is the Lima-Ica transit, but don´t let that fool you).  Our destination was Huacachina Lagoon, a beautiful resort just outside of Ica which is completely surrounded by these huge sand dunes where we had arranged to do Sandboarding. It actually says that you need to wear sturdy shoes for this kind of activity, and while that is technically untrue, what I would say is that if you don´t wear sturdy shoes, don´t expect to wear them ever again. I went bare foot most of the time, and wore my espadrilles because they are the sturdiest shoes I have, and really, it´s nothing a little duct tape can´t fix. 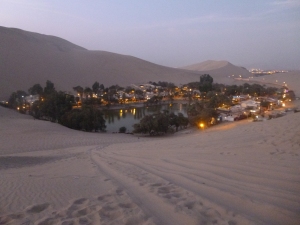 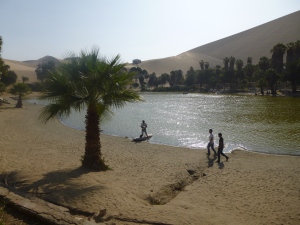 To get right out into the middle of the dunes, we took a buggy ride. It was a bit like being in a rollercoaster without the comforts of rails or a lap bar, and I think the driver just enjoyed hearing us all scream as he went up and down increasing huge and steep dunes. The sandscape is so impressive, right in the middle of the desert it looks like another planet. It is honestly one of the most beautiful things I´ve ever seen. 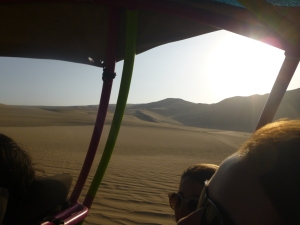 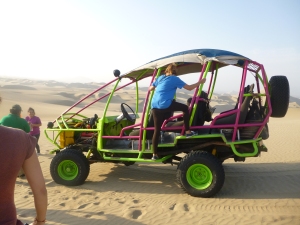 The sandboarding itself is just like surfing on the huge sand ´waves´. You can attempt to stand up, or else lie on your front, tuck your elbows in and speed down the slopes like a bob sledder. I went for the second option and it was so much fun, although I would say that if, hypothetically, you refuse to use your feet as brakes because, say, you don´t want to break your shoes, you will build up an incredible amount of speed and end up sprawled at the bottom, spitting sand and seeing stars (and saying to yourself “That was awesome!“). Unfortunately there are no pictures of the actual sandboarding (as graceful and dignified as it was) because taking a camera down a sand dune at an improbably fast pace is not a clever thing to do. But it was amazing, and I am desperate to beg, blackmail or otherwise persuade my cousins to teach me to snowboard! 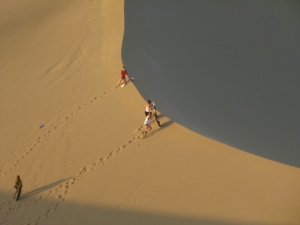 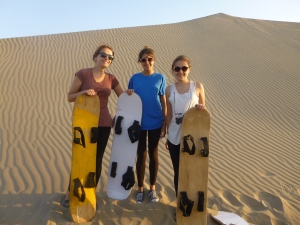