Hola Chicos! Sorry for the insane length of this post, but a lot has happened! We are in the middle of moving accomodation and preparing to return to Lima, we are super busy and super exhausted but still smiling! (p.s. if you have sent me an email recently and I haven´t replied, please do send it again, I seem to be having some trouble with my inbox…) 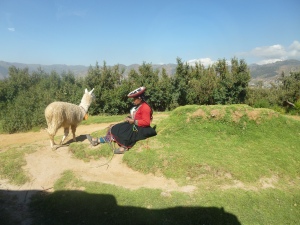 ¨Why did we agree to this again?¨ Probably the phrase that was used the most frequently by the three of us as we sat in a hotel in Cusco having our pre-trail briefing. We had a bit of a panic when we found that the 6kg weight limit included a 3kg sleeping bag and the 1kg duffle bag that we were supposed to be packing all of our stuff in to. Needless to say, I quickly abandoned the idea of being warm or clean, discarding all my spare t-shirts and actually using the phrase ¨I don´t really need a hairbrush…¨ There were fifteen of us in the group, I was the youngest, closely followed by Wang and Kati, and the rest of the group was made up of a variety of nationalities and ages, all with English as a first or second language. On the first day, we travelled through the Sacred Valley, which was so beautiful and interesting, and I really enjoyed seeing it. Someone that might not have enjoyed the first day so much was our guide, Henry. This because in the space of the five hour tour, three members of our group managed to pass out, collapse, or be taken to hospital! He must have been dreading the next four days! Meanwhile, we all clicked really well as a group, and even began speculating about who would be the next to ´drop´. 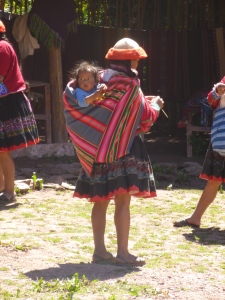 A Community in the Sacred Valley 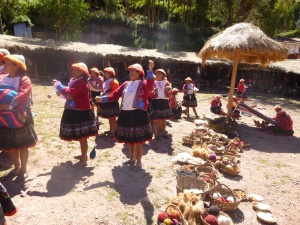 The next day, we were all remarkably well recovered and set off with much trepidation for the start point. We went through passport control, and started the Inca Trail proper. It actually starts with a very steep hill and I confess to being a bit worried! We also met our assistant guide Elias, who stamped my passport, saw that I am seventeen, and then laughed like it was the best joke he´d ever heard. It earned us the affectionate nickname ´chicas neñias´for the rest of the trip. 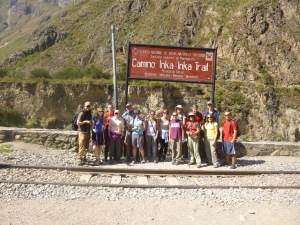 The first day is often described as an ´easy´day, and while it is certainly not impossible, it is very tiring, and the altitude is a killer. We managed to keep pretty well at the front of the group all day, but if I´m being honest, this is primarily because the people at the front get the longest rest stops, and they get lunch first. I was actually last back to camp on this day, but that is only because I tripped trying to run away from a donkey. Talking of lunch, we were shocked to arrive at the bottom of a valley and find a dinner tent laid out, complete with coca tea. We were then served the most amazing three course meal. Given that every piece of cooking equipment, every ingredient, every tent pole, every chair and every plate has to be carried on the back of one of the porters, I was completely blown away by the quality of the cooking and the service. All trek, we had delicous food, and they catered for my allergies much better than any hotel or restaurant I have ever eaten in in England! 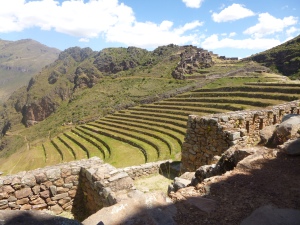 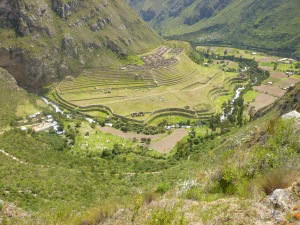 Back at camp, we were served ´afternoon tea´of popcorn and hot chocolate, and on the last day, the chefs even baked and iced a cake on the peak of one of the mountains! There was a lot of friendly banter and laughter around the dinner table which led to the three of us being referred to as “The Three Stooges”. At the ridiculously early, but well-needed hour of 8pm, Kati, Emily and I slotted ourselves into one of the tents, which, incidentally, are only meant for two people, but are exactly wide enough for three small people to lie side by side like sarcophagi. It is much more fun this way. 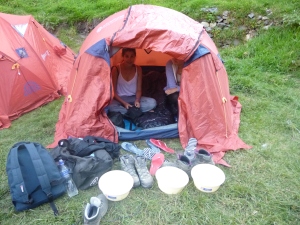 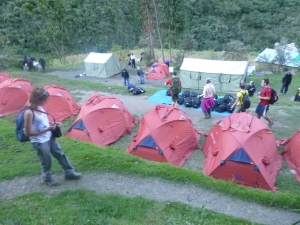 The next day, we were woken at 4.30am by the tent being shaken and a much too energetic cry of ¨Good morning! Chicas neñias!¨ We emerged bleary eyed from our tent and were handed steaming cups of coca tea. We then proceeded to stare at them for ten minutes in a sort of confused disbelief, and as a result we were late for breakfast. The second day was what Henry referred to as ´difficult´. Given that this man has done the Inca Trail over five hundred times, what is difficult for him proved near impossible for us. It is five hours of uphill, followed by a summit, and then two hours of downhill. The uphill wouldn´t seem that bad in England, but coupled with the scorching heat and the altitude which seems to make the air you breathe insufficient to fill your lungs, it is really brutal. We stopped for our first snack break, and then walked on for about another hour. It is relentless uphill, you have to push yourself up these huge stone steps which come up to my knees, and everytime you turn a corner you are faced with another hill. At this point, my lungs seemed to have shrunk and I was struggling to get enough air down my neck. I had a moment of crisis when I decided that I physically couldn´t carry on, my body wouldn´t let me. But of course, I couldn´t go back and I couldn´t stop so on we went. We got to the top of the hill, slowly, by the most incredible effort of teamwork I have ever seen , and much cursing of all and sundry. After five hours of hauling ourselves up the uneven terrain, it was a triumphant moment. 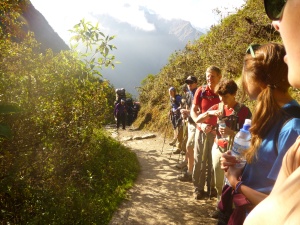 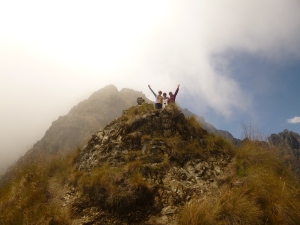 The downhill is pretty savage on the old knees, but we were just grateful that we were no longer headed upwards! We got to the camp and all of us fell on lunch like it was the first thing we´d eaten in weeks and weeks! After that, we were done walking for the day so we had a siesta, and then all met up for afternoon tea and dinner, and played many many games of cards by the light of the gas lamp. After dinner, we were formally introduced to our porters. Five hundred people walk the Inca Trail every day, and of those, three hundred are porters, carrying the duffle bags, cooking equipment, tents and all manner of other things for the tourists. There were twenty porters and two chefs in our team, and we were introduced to each one of them. Afterwards, we introduced ourselves, and then shook hands with each porter. In the trekking team there was Emily, Kati and I, Ben, a postgrad product designer who had ridiculously long legs, Freida, a swedish graduate who has lived in London for six years and will soon be moving to Sydney with her boyfriend, Benny and Emma, who were really lovely and hilarious to talk to, Benny is in the army and Emma is a student nurse, John and Jo who are both accountants and are about to finish travelling for seven months together, Leana and Matt, an Australian couple who always seemed to be smiling about something, Tegan and Stefan who are Canadian and Stefan, who is a policeman, is the most well prepared and resourceful person I have ever met, and finally Philip and Frances from Perth, who must be near retirement age but still gave us all a good run for our money. 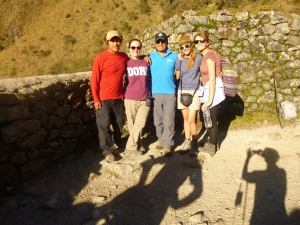 Elias, Me, Henry, Emily and Kati 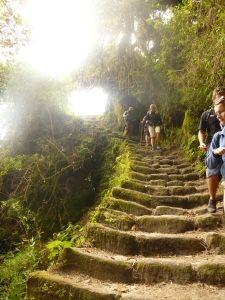 The third day was a relief in comparison to the prievious two, but it is a very long day (I think I saw some teary eyes when we were given cake at lunch time!) and there is a lot of downhill. Tired of picking our way carefully down through the rocky steps, the three of us decided to do as the porters do, and adopted a technique of sort of running and jumping down the steps at great speed, which is much less tedious and more exciting because of the possibility of fracture, limb seperation or the like. Of course, we were much slower and less graceful than the porters but we found that it was much comfier for the knees. Much worse for the ankles though. Oops. Anyhow, for this section of the trek it felt at times that we were really in the jungle. We were surrounded by this dense vegetation and the rocks had this strange thick kind of moss all over them. It honestly looked like we were in a different world sometimes. Of course, it wouldn´t be the Inca trail without the amazing Inca ruins which line the route. We got to see the original architecture and houses, and I was so impressed by the construction, which is both sturdy and gorgeous to look at. 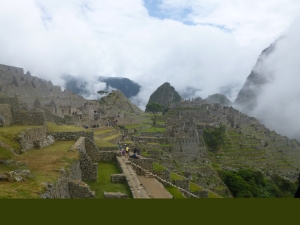 The visibility is quite bad here unfortunately, but the sun came out later on. 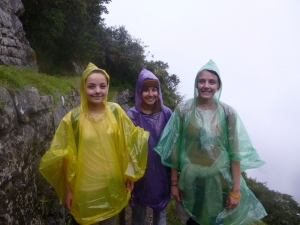 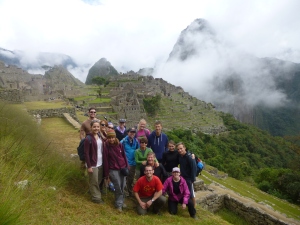 The most beautiful site of all is Macchu Picchu, and when we arrived very early in the  morning on the fourth day, it was brilliant. We all looked unapologetically idiotic in our rain ponchos, and as we made our way down to the ancient city, the cloud gradually lifted and we caught our first glimpse. It really is amazing and even though we were all exhausted, we explored the whole place. The sheer number of tourists at the site was a bit of a culture shock after the tranquility of the trail, but I can see why it´s  so popular! It was worth trekking for four days to see it, and that´s saying something! Finally, we started to head home, and, although we were sad to say goodbye to the group, I was so desperate for a shower and a comfy bed, it was bliss to return to the hotel in Cusco. This has been a week that I will never forget. MTG, PV x 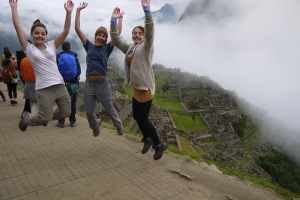 p.s, we´re actually breaking the law in the above photo, apparently it is expressly forbidden to jump in Macchu Picchu!