We have been in Cusco for three days now, and after a last minute change of plans from Real Gap (apparently our accommodation fell down…) we have been posted with a host family. 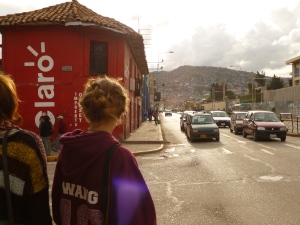 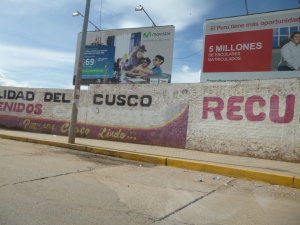 We had to leave the hostel in Lima at 2.30am to catch our flight on Saturday and there was much mutinous grumblings against our past selves for thinking it was a good idea to schedule a flight at that ridiculous hour. It turned out okay, and I read the whole of the Hunger Games on the plane, so at least I now know how to kill and eat a rabbit, a deer or a Wang if the starvation really starts to bite.

The air stewards on the plane were hilarious. One of them kept rolling his eyes and sulking because his colleague was making him do the safety demonstration, but when the plane stopped in Arequipa, I went to the open door for some air and he was pointing out all the mountains surrounding us to me. I think he thought I was Spanish but I sort of nodded anyway and he didn´t mind.

Well, the host family turned out to be this one robust Peruvian lady who doesn´t know any English and keeps trying to feed us this strange herbal tea. Anyway, it is a relatively nice house, and I feel like I am much more in the ´real´ Peru here, much less touristy and generally much dirtier, but I like it. Cusco is very old and derelict, but in a charming foreign way. Lima was exceptionally well kept, Cusco is much less so. There are some more modern shops interspersed with the rest, but that´s about it. We are very near the centre and have already enjoyed exploring most of the city.

I think Wang summed it up very well on the taxi ride here, when she said, ´´it´s very cultural here´´

Quote of the day is from Kati´s mum who text her saying ´take lots of photos. I think Peru is very mysterious.´ Oh, how we laughed. The altitude seems to have turned the blood in my muscles into water, it is very disquieting, but I have been breathing very successfully so far, so that is a comforting achievement.

I am very frustrated at the quality of the photos that I have been able to take, I want to take photos of the people here but that is hard to do, and landscape shots are a little non-descript. I´ll work on it and try and post a few good ones. (Especially as I know that there may be some very good photographers reading this blog!)

Kati and Wang and I have been scouring Wang´s guidebook for stuff to do around here and there is so much!  The volunteering is a bit confusing at the moment because the Spanish lady (Lourdes) we are staying with is supposed to be our liason with Real Gap and I don´t think she even knows who they are. I think she thinks that we are crazy. We have absolutely no way to communicate with her apart from the few phrases of Spanish we can piece together, and she won´t talk slowly to us, which is so frustrating. Today, we are supposed to begin volunteering at a local school for two weeks, but we haven´t been contacted by the school, so we are going to turn up there on Monday (tomorrow) and see what happens. I guess we´ll find out!

Anyway, it´s all good, Kati and I became slightly hysterical last night which didn´t help with Lourdes´ opinion of us. As I left the house today, I realised I´d forgotten my map and ran back up for it. Lourdes then proceeded to lecture me in rapid Spanish about leaving the bathroom light on and several other misdemeanors. I am actually in a Peruvian Fawlty Towers, I love it.

I am really enjoying the independence, and the fun of doing new things, as well as hanging out with Kati and Wang. 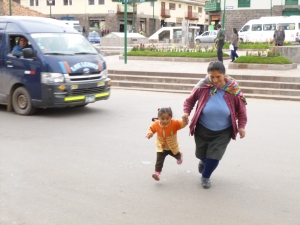 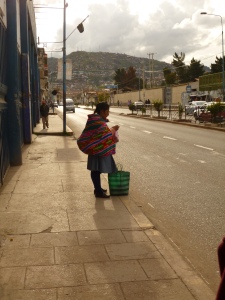 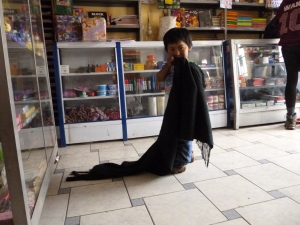 I think that what is so interesting about Cusco is the traditionally dressed men and women right in amongst the screaming traffic and the Internet cafés.

I will try and find some more pictures of some babies for you, they are adorable. This little guy came and said Hi to me and I sat on the floor with him and we played with my camera. What a cutie.

There is one in the internet cafe right now and I have to go steal him.
MTG, PV x