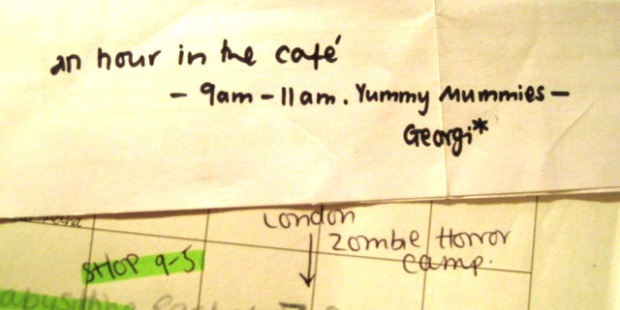 Hot on the heels of the last commuters come the ‘Yummy Mummies’. Or, as they should be more properly labelled; “Mummies: Assorted – some yummy”. In they come, in small herds, fresh from the school run, or else in Sweaty Betty tracksuits, remarkably fresh even after an hour of aerobics, or Pilates, or some terribly progressive exercise class in which they use their own babies as dumbbells. They power walk to the counter and casually order a skinny latte, loudly declining the chocolate sprinkles as if to mock me with their abundant energy and passion for exercise. “Yes” they seem to say “Yes I am one of those frightful early morning people, and Yes I just did a two hour spin class and Yes instead of feeling sweaty and ugly I feel fabulous.” This particular Mummy is prone to requesting a takeaway cup so that she can do her shopping while drinking, as if multitasking is the mark of a truly yummy individual. For the majority of the time, however, we see fatigue. Women pushing pushchairs that weigh more than they do, drinking coffee as if it were the elixir of life, talking about how she doesn’t regret for one minute sacrificing her career, but she’s already gone back part time; she’s still close to London, she’s still working, she’s still got it. And I pull funny faces at their babies and I clear their cups and I do not say that you may only be an hour away from London but an hour is a long time when it’s six am and it’s raining. My favourite customers during the Yummy Mummy Time Slot are the proud grandparents. The Grandmas and Grandpas who have become honourarily Yummy as they carefully tote around their chubby grandchildren and lavish them with fondant fancies – which they will invariably dribble on and then abandon, and frothy ‘babyccinos’ which they will invariably smear over their own chubby faces and over the prized possessions of their doting grandparents. There’s something about watching a severe bespectacled old man feed pieces of Apple Danish to a round-eyed toddler with a tiny pastry fork. The last honorary member of this category of the morning is ‘Phil (SLING)’, so called because for the first few weeks that he frequented the café, he wore a sling. There has been, for as long as I can remember, a partially completed loyalty card behind till labelled ‘Phil (SLING)’, this because Phil does not own a wallet, and so we keep the card for him and stamp it each time he comes in. Phil also seems to be a secret agent, or Indiana Jones. I am not being fantastical, I assure you. Phil is a muscular, athletic man in his late thirties, he doesn’t own a wallet, he can drink two large coffees in one sitting and, as if further evidence were required, he always seems to be stiff (as if having had a hard week of being a kick-ass archaeologist), or else injured. (No sling today, but facial bruising indicates recent altercations with bad guys/ enemy spies). For this reason, I always make Phil’s coffee extra good, and I know that the other staff sometimes give him free coffee, so they must think that he is Indiana Jones as well. Between caring for a potential secret agent, frothing endless milk for non-plussed babies, and listening to groups of Yummy Mummies argue over who gets to pay the bill (“I’ll get it” “No don’t be silly, it’s my treat” quickly escalates into women shoving handfuls of money into each other’s handbags, and fighting to shove their credit cards into the machine), I am glad when eleven ‘o’clock comes around and the last push chair sweeps gracefully away. Even Phil has important business to attend to. I wish him good luck as he leaves and he gives me a confused look. I just smile conspiratorially as if to say; “it’s okay, your secret’s safe with me – Mr Jones.” PS – It’s late, but it is Thursday, just. Also – ZOMBIE HORROR CAMP – more to follow. PV x

← October is the cruellest month
z0mbies →